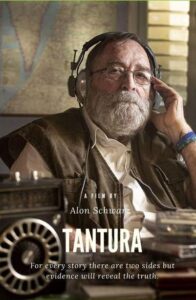 deep dive into the tape-recorded words “erase it” as those two words take on new weight in the context of history and war. When the State of Israel was established in 1948, hundreds of Palestinian villages were depopulated in its aftermath. Israelis know this as the War of Independence. Palestinians call it “Al Nakba” (the Catastrophe). In the late 1990s, graduate student Teddy Katz conducted research into a large-scale massacre that had allegedly occurred

in the village of Tantura in 1948. His work later came under attack and his reputation was ruined, but 140 hours of audio testimonies remain. Director Alon Schwarz revisits former Israeli soldiers of the Alexandroni Brigade as well as Palestinian residents in an effort to re-examine what happened in Tantura and explore why the Nakba is taboo in Israeli society. The now elderly ex-soldiers recall unsettling acts of war while disquietly pausing at points they either don’t remember or won’t speak of. Audio from Katz’s 20- year-old interviews cuts through the silence of self-preservation and exposes the ways in which power, silencing, and protected narratives can sculpt history.

For more go to: reelpeakfilms.com

About the filmmaker – Writer, Director and Producer Alon Schwarz is an award-winning documentary director. In 2017, he directed and produced the feature documentary Aida’s Secrets, which premiered at Hot Docs, won the Audience Award at Tel Aviv’s Docaviv Festival, and was theatrically distributed in the United States and Israel. Prior to his filmmaking career, Alon held management positions in the software and technology sector after being a serial entrepreneur.

About the filmmaker –  Writer and Producer Shaul Schwarz is an award-winning documentary filmmaker, producer and cinematographer. His debut documentary film, Narco Cultura, premiered at the Sundance Film Festival in 2013. In 2016 he directed the Emmy-winning series A Year In Space, produced with Time’s Red Border Films, co-directed the documentary Aida’s Secrets, which premiered at Hot Docs in 2016, and co-directed the Emmy-winning documentary Trophy, which premiered at Sundance Film Festival in 2017. Shaul is a co-founder of Reel Peak Films with Christina Clusiau. More recently he was an executive producer and cinematographer on the Netflix documentary series Unnatural Selection, and the co-director, producer, and executive producer of the Netflix Original Docuseries Immigration Nation.

“A hugely compelling story about how power tries to silence all other narratives.” – Vladan Petkovic, Cineuropa

“Tantura is a wonderful film about state-sponsored cultural amnesia and how we deal (or don’t) with the atrocities upon which our countries were built.” – Alex Heeney, Seventh Row

“Perhaps the most harrowing thing in Tantura, a striking documentary from Alon Schwarz, is the nervous laughter that slips out of the mouths of old men allegedly complicit in a massacre decades earlier.” – Dan Mecca, The Film Stage