TED K immerses us into the addled world of Ted Kaczynski, living a life of almost 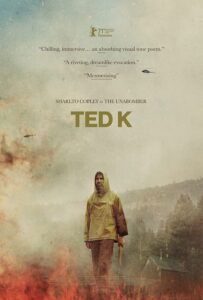 complete seclusion in a simple wooden cabin in the mountains of Montana. But then this former university professor, who despises modern society and its faith in technology, becomes radicalized. What begins with local acts of sabotage, ends with deadly bomb attacks. To the outside world, Kaczynski becomes known as the Unabomber. Based on Ted Kaczynski’s diaries and writings, and his infamous “manifesto” director Tony Stone takes the viewer on an intimate and infuriating kaleidoscopic true crime journey into the life of

one of America’s most complex and eccentric killers. TED K features a tour-de-force performance from Sharlto Copley who portrays the complexity of this unique outsider, raging at the forces of both the inescapable technological society that

plagues him and his own inner demons. Director, writer, producer and editor Tony Stone (Severed Ways, Peter and the Farm) joins us for a conversation on what attracted him to telling this story from the Unabomber’s point-of-view, filming on the property where Kaczynski’s infamous cabin once stood and the importance of Sharlto Copley brilliantly blending together Kaczynski’s self deluding righteousness with the arbitrary ruthlessness he directed at his hapless victims.

For news and updates go to: superltd.com/films/ted-k

To watch in a theatre go: superltd.com/films/ted-k#drive-ins

For more about Tony Stone go to: heathenfilms.com

About the filmmaker – Tony Stone is director, producer, writer, editor and cinematographer.  His notable work includes writing and directing the films Severed Ways (2007) and Out of Our Minds (2009), directing the documentary Peter and the Farm (2016) and cinematography for R.E.M.’s music video “It Happened Today“.

“It is a riveting, dreamlike evocation of this man’s tortured, unhappy life, whose transient successes bring him no pleasure of any kind.” – Peter Bradshaw, Guardian

“A biopic that effectively honors its subject with its opaque severity.” – Guy Lodge, Variety

“Whats surprising about this account isn’t his methods, his cunning and his amoral, horrifically random selection of targets. It’s how relatable Copley makes this monster.” – Roger Moore, Movie Nation

“They made a movie about the Unabomber and it’s a work of art.” – Anne Brodie, What She Said