Terrence McNally, Every Act Of Life, tells the story of the groundbreaking life and work of 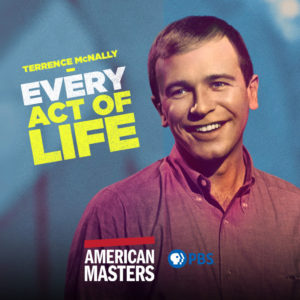 5-time Tony-winning playwright Terrence McNally: a personal journey through 6-decades of the American theatre, the struggle for LGBT rights, triumph over addiction, the power of the arts to shape society, and finding love and inspiration at all ages. F. Murray Abraham, Audra McDonald, Christine Baranski, Edie Falco, Nathan Lane, Angela Lansbury, Rita Moreno and others weigh in on the pioneering playwright’s influential career, and speak frankly of his struggles as well as his

monumental successes. The voices of Dan Bucatinsky, Bryan Cranston and Meryl Streep are also featured. Intimate conversations with the late McNally complete this essential portrait of the four-

time Tony winner and 2019 recipient of the Special Tony Award for Lifetime Achievement in the Theatre. Playwright, librettist, scriptwriter and outspoken LGBTQ activist Terrence McNally died of coronavirus complications in April 2020 at age 81. American Masters and the filmmaking team explored McNally’s six-decade career through the intimate and revealing documentary. Director Jeff Kaufman and Producer Marcia Ross join us for a look back at one of the greatest playwrights  in American theatre history.

For news and updates go to: everyactoflife.com

Terrence McNally, Every Act Of Life, will be returning to PBS Streaming on June 1st.

About the filmmakers: Jeff Kaufman produced, directed, and wrote the documentaries Every Act Of Life (2018 Tribeca premiere, aired June 2019 on American Masters), The State of Marriage, Father Joseph, The Savoy King: Chick Webb and the Music That Changed America, Brush With Life: The Art of Being Edward Biberman, and Education Under Fire, plus a number of short films for Amnesty International, and programs for The Discovery Channel, and The History Channel. He also edited/designed a book based on the film Every Act Of Life, contributed cartoons to The New Yorker, and illustrations to The Los Angeles Times and The New York Times, wrote/illustrated several children’s books, and hosted daily radio shows in Vermont and Los Angeles.

Marcia S. Ross produced the documentaries Every Act Of Life, The State of Marriage, Father Joseph, and The Savoy King. Additionally she has an over 3-decade career as an independent casting director and casting executive, serving 16 years as EVP for Casting at Walt Disney Motion Pictures, and 5 years as VP for Casting and Talent Development at Warner Brothers TV. Some of her film and television credits include Clueless, Cujo, thirtysomething, Murder in Mississippi, 10 Things I Hate About You, The Princess Diaries, Romy and Michele’s High School Reunion, The Lookout, Enchanted, Oblivion, and Parental Guidance. She has received career achievement awards from the Casting Society of America and the Hollywood Film Festival.

“McNally’s life has the sweep of an epic novel, except that the novel’s inevitable movie version could never have as much star power as his life did.” – Ren Jender, Village Voice

“It’s a great introductory piece for those new to this area of theatre, and a pleasing chance for others to reflect on one of its greatest talents.” – Jennie Kermode, Eye for Film

“It does true justice to its subject by showing how his influence goes well beyond words, finding his tribe on Broadway and making it feel like home for others.” – Stephen Saito, Moveable Fest

“McNally’s life has the sweep of an epic novel, except that the novel’s inevitable movie version could never have as much star power as his life did.” – Ren Jender, Village Voice