Based on the play by Kaite O’Reilly, THE ALMOND AND THE SEAHORSE is the 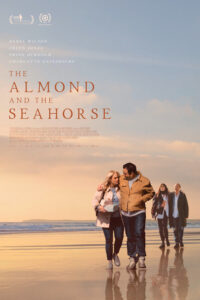 cinematographer Tom Stern. Sarah (Rebel Wilson) is an archaeologist who loves her husband Joe (Celyn Jones) but after a traumatic brain injury (TBI) their love is trapped in the past. Toni (Charlotte Gainsbourg) is an architect and loves her partner Gwen (Trine Dyrholm) but after a TBI they have been imprisoned in a fifteen-year loop. Love is the only thing that keeps

them all going but something has changed, and both Sarah and Toni are determined to not let it all unravel as they face their fears of being forgotten by the people they love most. Co-director, co-writer

and co-star Celyn Jones (Six Minutes to Midnight, Born a King) joins us for a conversation working with his award winning, frequent Clint Eastwood collaborator, co-director and cinematographer Tom Stern, assembling a superb cast of actors and the challenge being in front of the camera and in the director’s chair for his debut feature film project.

For more go to: ifcfilms.com/the-almond-and-the-seahorse

About the filmmaker – Co-Writer / Co-Director / Actor Celyn Jones is a critically acclaimed actor and BAFTA nominated screenwriter from Wales. The Times referred to him as ‘the powerhouse writer-performer behind the greatest Dylan Thomas biopic yet’. He started his producing career with a series of award-winning short films. Celyn is the Co-founder of Mad As Birds Films and has produced on every one of their feature films including the Diane Keaton comedy POMS which he developed from a one-line pitch. Celyn wrote Set Fire to the Stars, which he starred as Dylan Thomas opposite Elijah Wood. The film received nominations for the Michael Powell award for the Best British Film, EIFF & MIFF Audience awards and won three BAFTA Cymru awards. Since then he has written the critically acclaimed, BAFTA & BIFA nominated, noir-thriller, The Vanishing, starring Gerard Butler & Peter Mullan and has co-written Eddie Izzard’s first screenplay, Six Minutes to Midnight starring Judi Dench and Jim Broadbent which was released by Lionsgate. He co-wrote the screenplay for The Almond and the Seahorse after originating the role of Joe on stage. Celyn has now moved into Directing, with The Almond and the Seahorse being his directorial debut. Celyn has also adapted the tense, psychological thriller novel The Night Guest for a high-level American co-production, which he will Direct and has attached himself to direct Richard Lumsden’s adaption of his novel The Six Loves of Billy Binns, which will star Tom Courtenay. As a character actor Celyn continues to be in high demand, acting opposite the likes of Alicia Vikander in Wim Wenders’ Submergence and playing Winston Churchill in Agusti Villaronga’s Born A King. In 2019 he was awarded the prestigious BAFTA Cymru Award for Best Actor, after giving a sensational performance of a real-life serial killer in Manhunt for ITV. He is a proud Ambassador for the young people’s charity Into Film and a patron for the Theatre Colwyn cinema in North Wales.

About the filmmaker – Tom Stern is a world renowned cinematographer who started his career in 1977 as a gaffer in Scalpel before working as a chief lighting technician on films such as The Goonies, Spaceballs, American Beauty and a number of films directed by Clint Eastwood such as Sudden Impact, Pale Rider, Heartbreak Ridge, Bird or A Perfect World. In 2002, he started working as a cinematographer with Clint Eastwood on Blood Work, quickly followed by Mystic River in 2003. He became Eastwood’s primary cinematographer working with him on projects such as Million Dollar Baby, Letters from Iwo Jima, Gran Torino, Invictus, American Sniper or Sully. Tom also worked with Clint Eastwood on Changeling for which he was nominated for Best Cinematography for an Academy Award and a BAFTA. Tom’s prestigious work also includes the first Hunger Games. The Almond and the Seahorse is Tom’s first time directing.