Against the backdrop of a culture in crisis, THE ART OF MAKING IT follows a 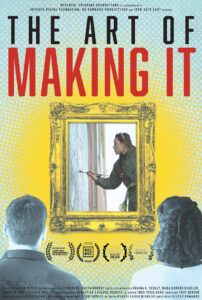 diverse cast of young artists at defining moments in their careers to explore whether the art world ecosystem meant to nurture them is actually failing them. Are we at risk of losing the creative voices of a new generation as universities, galleries, and museums are facing cataclysmic changes? Or are we on the verge of rewriting history, expanding access, and making art more accessible for all as outdated models are being rethought? Embracing the conundrum of how artists must be in the market, but not of it, THE ART OF MAKING IT is both a cautionary tale about what America stands to lose if

we don’t rethink how we value artists, and a love letter to those who persevere in their artistic practice in spite of the extraordinary odds against ever achieving a sustainable

career. Director Kelcey Edwards (Ghost in the Material, Wonder Women! The Untold Story of American Superheroines) stops by to talk about the reasons why artists of all stripes from all corners of the world are driven to swim upstream in the most precarious and treacherous shark infest waters to bring their vision to all who are willing to engage.

For news and updates go to: theartofmakingitfilm.com

About the filmmaker – Kelcey Edwards – Director is an award-winning filmmaker, author and curator, Kelcey received an MFA in Documentary Film from Stanford University. As a director, her short documentaries have screened at SXSW (Letter), Silverdocs AFI/Discovery Channel Film Festival (Gentle Creatures), and True/False (Ghost in the Material). In 2012, she produced Wonder Women! The Untold Story of American Superheroines (SXSW premiere, Independent Lens broadcast). Kelcey’s fiction writing has appeared in storySouth and Border Crossing; her art writing has been published by Hamptons Art Hub, Portray Magazine and Salomon Contemporary, and her nonfiction has been published in New Voices from Stanford (Stanford University Press) and Persistence of Vision (Austin Film Society). Kelcey has served as a lecturer and panelist at several colleges and universities, including Pratt, Barnard, The New School and NYU Tisch. She also runs Iron Gate East, an exhibition series based in the Hamptons, inspired by her pioneering gallery, Iron Gate Studios, which she co-founded in Austin in 2003.

“Every creative industry should get a survey of its shortcomings as engaging and comprehensive as Kelcey Edwards’ coast-to-coast travelogue of major galleries and the fine artists who struggle to break into them.” – The Movable Feast

“The Art of Making It soars when it concentrates, as it often does, on the concepts and the process of making boundary-breaking art.” – The Independent