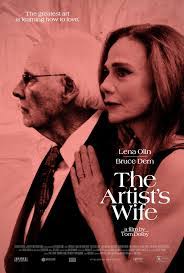 of celebrated artist Richard Smythson (Bruce Dern). Once a promising painter herself, Claire now lives in the shadow of her husband’s illustrious career. While preparing work for his final show, Richard’s moods become increasingly erratic, and he is diagnosed with dementia. As his memory and behavior deteriorate, she shields his condition from the art community while trying to reconnect him with his

estranged daughter, Angela (Juliet Rylance) and grandson from a previous marriage.  Challenged by the loss of her world as she knew it, Claire must now decide whether to stand with Richard on the sidelines or step into the spotlight herself. Director Tom Dolby (Call Me My Your Name, Little Men, Regarding Susan Sontag, Scotty and the Secret History of Hollywood) stops by to talk about his compelling, clear-eyed look at a loving couple’s faltering attempts to find a way forward.

For news, screenings and updates go to: theartistswifefilm.com

About the filmmaker – Tom Dolby’s feature film writing and directing debut, Last Weekend, starring Patricia Clarkson, was released in 2014 by IFC/Sundance Selects and called “Chekhovian” by The New York Times, with Ms. Clarkson’s performance hailed as “terrifically nuanced, heartbreaking, and often very funny” by the San Francisco Chronicle.  Dolby is the founder of Water’s End Productions, where he and his team have developed a slate of narrative features and documentaries with the goal of supporting provocative and challenging human stories. The company funded the development of the Academy Award-winning film Call Me By Your Name, on which he served as an Executive Producer.  Dolby and Water’s End have also produced the critically acclaimed films Little Men, Regarding Susan Sontag, Scotty and the Secret History of Hollywood, The House of Tomorrow, and Little Woods, among others. Upcoming projects include an adaptation of the novel Women in Sunlight by New York Times bestselling author Frances Mayes (Under the Tuscan Sun). Dolby is also the author of four novels, and his writing has appeared in The New York Times, The Village Voice, and the San Francisco Chronicle, among others. Born in London and raised in San Francisco, he is a graduate of Yale University, where he received his B.A. in the history of art. He lives in Los Angeles with his two daughters. For many years, he had a house in Wainscott, NY, right next to East Hampton.

“By refusing to compromise about life’s messiness, it makes an art of chaos in elegantly composed vignettes filmed with a chilly beauty, and gives us an ending that is maddening, yet absolutely true.” – Andrea Chase,Killer Movie Reviews