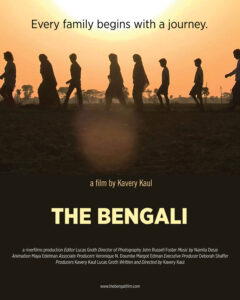 embarks upon an unlikely quest when she travels from New Orleans, the city of her birth, to India, home of her grandfather Shaik Mohamed Musa. An African-American writer whose family has lived in Louisiana for four generations, she travels with Kolkata-born filmmaker Kavery Kaul to a part of India where no African-American has ever gone. Her search for the past is fraught with uncertainty, as she looks for her grandfather’s descendants, the 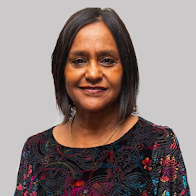 land he claimed to own, and the truth behind the stories she grew up with. Through Fatima’s moving and inspiring personal journey, THE BENGALI, tells the untold story of ties between South Asians and African-Americans in the U.S. In the late nineteenth-century, men from India arrived in the United States and married African-American women. The men were

Muslims; the women were Christian. Together, they built families in an America that held them all at arm’s length. THE BENGALI, reaches across seemingly insurmountable cultural divides to shine light on timely issues. Its boldly different story of immigration reclaims timeless themes of family. Award-winning filmmaker Kavery Kaul (Cuban Canvas, Long Way from Home) joins us for an illuminating conversation on this intriguing and little-known story of migration, trials and triumphs of mostly Bengali men who came to America searching for a better life in America.

For updates and screenings go to: thebengalifilm.com

About the filmmaker – Award-winning Indian-American filmmaker Kavery Kaul’s documentaries challenge who “we” are and who tells that story. Founder of riverfilms, her works have been featured at DOC NYC, Telluride, London, Rotterdam, and Sydney Festivals; in countries including India, Japan, Burkina Faso, and Italy; at the Kennedy Center (DC), National Museum of Women in the Arts (DC), Metropolitan Museum of Art (NY), Cleveland Museum, and High Museum (Atlanta). Kavery directed the prestigious Imagen Foundation Award Nominee Cuban Canvas, a Margaret Mead Film Festival Selection. Showcased at the Maysles Cinema (NYC), Back Walking Forward went on to numerous screenings internationally; Long Way from Home was a Film Threat and Time Out Critic’s Pick. Her cultural documentaries include the theatrically-released One Hand Don’t Clap; First Look, a National Latino Consortium presentation on PBS-TV; and Wild at Art, in the PBS-TV “Art to Art” series executive produced by Asian Women United. Through an intimate lens, Kavery crafts stories which boundlessly straddle different worlds. She has been awarded a Fulbright and a Logan Fellowship. Her highly-acclaimed TEDx Talk speaks to the power of storytelling to connect people across divides. Learn more at kaverykaul.com

“There’s plenty of skepticism to be found in The Bengali; however, that’s just the starting point for an important conversation about first encounters, cultural education and life-changing travel experiences.” – Q.V. Hough, Vague Visages

“An absolute gem of a documentary.” – Neon Graffiti

“In this documentary, award-winning filmmaker Kavery Kaul unfolds the fascinating story of the first South Asian male immigrants to the U.S. who married African-American women and made a home in the black community.” – Henry Louis Gates Jr.