Sarah Colt and Josh Gleason’s documentary THE DISRUPTED asked the question, what do a farmer in Kansas, a laid-off factory worker in Ohio, and an Uber driver in Florida 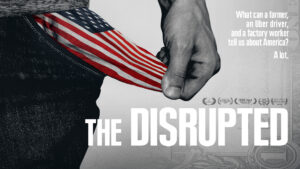 have in common? All three are resourceful, positive thinkers who strive to adapt and thrive despite dehumanizing forces at play in the American economy. Donn is a fifth-generation farmer, struggling to hold on to 900 acres of land uncle made a full-time living raising crops and livestock. But in the last decade, corporate consolidation and free-falling commodity prices have made it impossible for small farms to achieve a profit. Cheryl didn’t plan on becoming a driver for Uber and Lyft. She spent years working her way up the ladder in the mortgage industry as a single mother raising hree kids. But her career came to an abrupt halt in 2008 when

the crash bankrupted her employer. For Pete the closure of the 3M sponge factory, where Pete held a union job for 12 years, is the latest chapter in the city’s decades- long deindustrialization into

the Rust Belt. As the film’s heroes face these roadblocks with courage, certain ideals remain sacred: family, love, and staying strong in the face of adversity. Lush cinematography galvanizes a sense of place and, as the narrative unfolds, the intimacy with the characters results in an emotionally rich observational drama. Ultimately, THE DISRUPTED reveals a collective American experience of financial challenge, family resilience, and the quest for the purpose and dignity of work. Co-director Sarah Colt (Josh Gleason) stops by to talk about the unraveling of the American Dream and the cruel trajectory of economic deprivation and the systemic failure of any feasible path forward.

For news, updates and screenings go to: thedisruptedfilm.com

About the filmmaker – Sarah Colt is an award-winning documentary filmmaker whose work brings to life the figures and forces that have shaped America. Since founding Sarah Colt Productions a decade ago, she has directed and produced numerous films for PBS, including the Emmy-nominated and Peabody finalist “Walt Disney.” Most recently, Sarah’s independent short documentary “True Believer” followed an evangelical pastor’s grassroots campaign for Congress. “True Believer” screened at several major film festivals across the country and had its online premiere on The Atlantic.

“Colt and Gleason interweave these stories with subtlety and irony, catching the nuanced details of their subjects’ lives and relationships, the cinematography evoking a mood of fading hope and dogged resistance.” – Boston Globe

“Eye-opening film about people being left behind in our current economy…theoretically the “forgotten men and women” Trump campaigned on. And in the ensuing years, not only have their lives not gotten better, they’ve gotten significantly worse.” – Film Week