Long before documentary series were the trend, filmmakers D.A. Pennebaker and 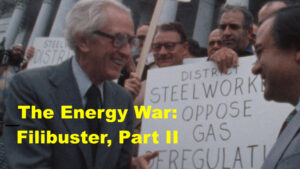 Chris Hegedus created THE ENERGY WAR: FILIBUSTER a ground-breaking episodic look at Washington, D.C in 1977-78. Part Two of the series, FILIBUSTER is a real-life political drama, taking audiences behind-the-scenes during the fierce legislative battle and historic double filibuster over President Carter’s natural gas bill. Referred to as a “holy war,” the issue had evaded solutions for more than thirty years and six presidents. THE ENERGY WAR features combatants on all sides of the political aisle, from oil lobbyists to Senator Edward Kennedy to Secretary of Energy James R. Schlesinger. First 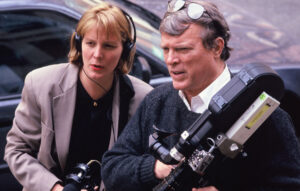 aired on PBS in 1979, the series has scarcely been seen since. The documentary continues to resonate today as politicians struggle to fix our current energy crisis. Chris Hegedus, D. A. Pennebaker, and Pat Powell capture all of the

drama and brinksmanship of a political era where senators did something nearly unimaginable today, they crossed party lines to negotiate an important and historically significant piece of legislation, the deregulation of the natural gas industry. Co-director Chris Hegedus joins us for a conversation on the why and how she and her collaborators were able to chronicle a ground floor, fly-on-the-wall view of political history.

For news and updates go to: phfilms.com/films/the-energy-war

About the film restoration – Pennebaker Hegedus Films and Foothill Productions have partnered to raise funds to fully restore the complete three-part, five-hour series The Energy War, part of a larger effort by The Pennebaker Hegedus Films Archive and Restoration project (PHFAR), that seeks to restore each of the more than 40 film titles in their library with the aim of housing the entire, restored collection under one roof, as an important and irreplaceable documentary film archive of our culture over the last 50 years.

About the filmmakers – D. A. Pennebaker and Chris Hegedus’ documentaries are a rich trove of extraordinary films spanning a wide range of topics — from intimate views of contemporary music (Don’t Look Back, Monterey Pop, Depeche Mode 101), to revealing looks inside the machinery of politics (The Energy War, The War Room), the arts (Company, Moon Over Broadway) and popular culture (Town Bloody Hall, Delorean, Kings of Pastry, Unlocking the Cage). Pennebaker is considered a pioneer of cinema verite filmmaking. In 1960, along with colleagues Richard Leacock and Robert Drew, he developed the first fully portable 16mm synchronized camera and sound recording system which revolutionized filmmaking and helped to create the immediate style of shooting that is widely adopted by documentary filmmakers today. Pennebaker Hegedus Films is an independent documentary film production and distribution company founded by D. A. Pennebaker. Throughout their 43-year collaboration, until his death in 2019, Pennebaker and Hegedus directed numerous films, including the Oscar nominated The War Room. Additional top tier accolades include the 2002 DGA Award to Hegedus for Startup.com, the 2004 Emmy award for Elaine Stritch at Liberty, and the prestigious Lifetime Achievement Oscar awarded to D.A. Pennebaker in 2013. Frazer Pennebaker has served as producer on every project since 1982 and along with Nate Pennebaker manages Pennebaker Hegedus Films sales and distribution.