THE FABULOUS FILIPINO BROTHERS consists of four vignettes that follows the 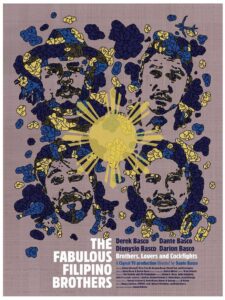 lives, for better and worse of four brothers, as their Filipino American family prepares for the ultimate Filipino event, a wedding. A blue-collar family, they share the same house save one, the Golden Child.  The Eldest Brother must secure his pride and position in the

family by paying for the wedding, this leads him to revisiting his old life as a hustler to make ends meet. The Golden Child is  stuck in The Philippines the day before the wedding and meets a lover from the past. The Youngest and most single connects with a new love… who may be his cousin, while The Middle Brother breaks out of a deep depression following the loss of a child using a dating app for the first time. Director,

producer and co-writer Dante Basco stops by to talk about the joy of working with his brothers and sister as well as extended family, filming their home town of Pittsburg California and telling a universal story of love family, finding your way and connecting with one another.

For news, screenings and updates fo to: beacons.ai/fabfilipinobros

You can also visit: 1091 fabulous-filipino-brothers

About the filmmaker – THE FABULOUS FILIPINO BROTHERS is Dante Basco’s directorial debut. Dante Basco is a film, television and voice actor, best known for his role as Rufio, the young leader of the Lost Boys in Steven Spielberg’s HOOK, and for his many voice acting roles, most notably as Prince Zuko from Nickelodeon’s Avatar: The Last Airbender; Jake Long from Disney Channel’s American Dragon: Jake Long; and Spin Kick from Carmen Sandiego.

“This silly, romantic, and gleefully raunchy movie tells a feel-good story and serves as an unabashed celebration of Filipino American culture.” – Victor Stiff, That Shelf

“So much of the vibe, the complicated dynamics of Filipino immigrant families in the United States, the crowded and complex relationships that form between multigenerational families all living under one or two roofs… it radiates through the film.” – Ed Travis, Cinapse

“A film that transcends it failings and becomes not just funny and warm enough to work, but a cultural touchstone” – Roger Moore, Movie Nation