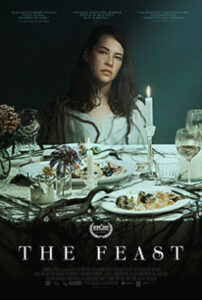 contemporary home made of glass and steel in the Welsh mountains. The matriarch is hosting a dinner party with her politician husband on behalf of a businessman hoping to buy land in the area for mineral mining. Unbeknown to them the owners of a neighboring farm are the only other guests and will be charmed into selling parcels of their farmland. The family’s two adult sons are reluctant dinner party guests. One is a London hipster struggling with addiction issues and the other is a doctor training for an ironman event. The family’s values and beliefs are challenged by the arrival of the young woman, Cadi, they

have hired to act as waitress for the evening.  Her presence forces the characters to face their shortcomings and question their relationship with the land they claim to belong to. Cadi’s influence grows in strength and the family’s behavior becomes increasingly extreme until they face the horror of what they represent and tragedy changes everything forever. Director Lee Haven Jones (DOCTOR WHO, THE BAY, VERA) joins us for a conversation on the inspiration for THE FEAST, the use of the native language in telling the story, the significance of Welsh folklore in connecting people to their land and culture.

For news and updates go to: fcfilms.com/films/the-feast

Director’s statement – On the face of it THE FEAST is a supernatural revenge horror that delivers all the thrills and spills that audiences expect of a genre film – the relentless slow burn of intrigue and suspense, the blood and gore. But as a cinematic piece it also functions on the level of parable. An allegory of sorts, it is a contemporary morality tale about the importance of being true to yourself and your community, and offers a stark warning against the consequences of greed and avarice. Rooted in the potent mythical tales of Wales where women are made of flowers and transform into animals, the film is singularly Welsh in tone but also universal in theme. Elucidating what Camille Paglia would refer to as the age-old battle between Culture and Nature, the film charts the struggle between those values that give structure and form to the world that Glenda and Gwyn inhabit – society, wealth, progress – and the indiscriminate forces of nature as embodied by Cadi that challenge this world order.  Moreover, thematically the film is preoccupied with the increasingly urgent issue of environmental sustainability, exploring how humankind exploits the land and abuses the earth. An environmental horror film with an eye to the ticking-clock of climate crisis, THE FEAST’s horrifying, blood-soaked conclusion suggests that our fragile planet will sooner or later take revenge on humanity for the devastation we have caused.  A meditation on family and history, greed and responsibility, identity and difference, THE FEAST intends to offer the viewer an intravenous injection of mood as well as an engaging edge-of-your-seat tale. Bringing together forensic performances, searing cinematography, a spine-tingling score and environmental politics, THE FEAST is a striking addition to the horror genre and a compelling piece of work that aims to blister the imagination, prick the conscience and scorch the heart.  Considering the film in its context as a contemporary Welsh-language film, it also becomes a tale of the individual’s responsibility to tradition, history and a language that exists against the odds despite sharing a land border with England whose language has colonized large swathes of the world.  Many who are unfamiliar with Wales will be unaware of the language’s existence but to those who know of the fragile cultural and linguistic ecosystem that exists in our small nation the film speaks keenly of the individual’s responsibility to sustaining a culture and language in the age of globalization. – Lee Haven Jones

About the filmmaker – Lee Haven Jones, director was born in Mountain Ash, Lee graduated from the University of Exeter with a first-class honours degree in Drama and won the Cameron Mackintosh Foundation Scholarship to study acting at the Royal Academy of Dramatic Art. Indulging his passion for film, he directed his first screen project in 2009, picking up a nomination for Best Documentary at the Celtic Media Festival.  He has since directed a number of drama projects, both in English and Welsh, including DOCTOR WHO, THE BAY, VERA, TIR, WIZARDS VS ALIENS, THE INDIAN DOCTOR and CASUALTY.  He won the BAFTA Cymru Best Director award for his work on THE INDIAN DOCTOR and was nominated for the Best Director award for a 3rd time in 2016 for 35 DIWRNOD. Lee’s first short WANT IT premiered at BFI Flare in 2015 and played at festivals worldwide.  It is now available to buy through Peccadillo. He has just completed his first feature GWLEDD (THE FEAST) which premiered at SXSW, and has won awards at festivals in South Korea, Switzerland and Portugal.  He recently directed forthcoming ITV drama series THE LONG CALL.

“The Feast is a blazing meal of fire and brimstone: there is no mercy for the wicked, who are on the receiving end of a zealous fury that can’t be stopped.” – Natasha Alvar, Cultured Vultures

“A new Thanksgiving tradition for horror aficionados with iron-clad stomachs and an appetite for visually striking scares that unsettle through thorny symbolism before their bloodletting begins in earnest.” – Isaac Feldberg, Inverse

“The Feast is unrelenting, captivating and unforgiving, and Jones is a visionary; between this and Prano Bailey-Bond’s exceptional Censor, it’s a genuine mystery why anyone but the Welsh are even bothering to make horror films right now.” – Alexandra Heller-Nicholas, AWFJ Women on Film

“Among the smartest, most literate, and goriest of SXSW’s Midnighters, The Feast is hands down the best of the section. A film that will amply reward repeated viewings, The Feast is a folk horror fan’s dream come true.” – J Hurtado, ScreenAnarchy

“If you love a good, slow burn with betrayal and elements of folk horror, The Feast is definitely up your alley, and I hope you get to see it very soon. It’s truly excellent.” – Lorry Kikta, Film Threat