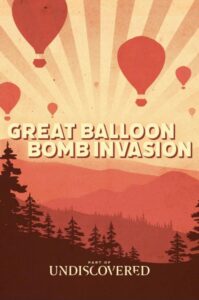 United States mainland was not attacked during WWII. But it was. Between 1944 and 1945, the Japanese launched

more than 9000 bomb-rigged balloons across the Pacific, resulting in tragic deaths in Oregon. These lethal “Fu-Go” bombs reached as far east as Indiana and as far south as Texas…but only 300 have ever been found, leaving potentially thousands of deadly bombs scattered across the US.

For the first time ever, an investigation is  launched into  the hidden history of this attack, with a high-tech hunt for the unexploded remnants. Director / producer / filmmaker  Stuart Chait, (Lost Gold, 10 Things You Don’t Know About) making his feature directorial debut with The Great Balloon Bomb Invasion joins us for a conversation on how he came to know about this little know story and why a small band of dedicated bomb sleuths are actively trying to track down these very dangerous World War II “artifacts”.

The Great Balloon Bomb Invasion is now streaming on discover+

About the filmmaker – Born and raised in Rochester, New York, Stuart Chait is a writer, producer, and director based in Los Angeles. He is a graduate of Boston University’s Film and Television Program, as well as its Playwriting Program. He has worked on top documentary television programs for History, Discovery Channel, National Geographic, and Travel Channel – including The Ultimate Guide to the Presidents, covering the entire legacy of the U.S. Presidency, and the innovative history series 10 Things You Don’t Know About, with punk rock icon Henry Rollins.