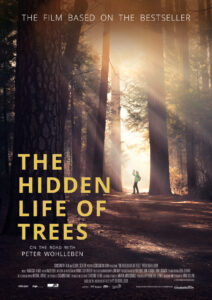 TREES. Based on his best-selling that has profoundly changed our understanding of forests, renowned forester and writer Peter Wohlleben guides us through his most enlightening ideas. Presenting his ecological, biological and academic expertise with infectious enthusiasm and candor, Wohlleben travels through Germany, Poland, Sweden, and Vancouver to illustrate the amazing processes of life,

death, and regeneration he has observed in the woodland for decades. The result is an immersive and eye-opening look at the  scientific mechanisms behind these wonders of nature. Peter Wohlleben, subject and best selling author

joins us for a very engaging conversation on his reluctance to write The Hidden Life of Trees, his surprise at the reaction to the book and his own journey to better understand the magnificent complexity and awe-inspiring world of the kingdom of forests manifested by a remarkable level of dialog that take place among the thousands of it’s inhabitants.

Opens July 16 in Theaters Across the U.S. via Capelight Pictures and MPI Media Group

For news and updates go to: globalscreen.de

About the production – Adaptations of bestsellers are part of Constantin Film’s DNA: the Munich-based film company’s adaptations – from “Christiane F.” to “The Name of the Rose”, “The House of the Spirits” and “Perfume – Story of a Murderer” to “Look Who’s Back” – have regularly become blockbuster hits at the German box office. But Constantin Film had never before adapted a non-fiction book as a documentary. Like many millions of other people, producer Friederich Oetker was given Peter Wohlleben’s book The Hidden Lives of Trees as a present. “To be honest, I only read it after I had been given it as a present for the second time,” he says. “But then in one go. I was incredibly impressed by the way. Peter Wohlleben took the reader by the hand and guided them through the forest. It was like a guided tour, a walk in the forest. Although it covers such large areas of Germany, the forest is a bit like terra incognita. Very few people have a real relationship and access to it. Wohlleben wrote a forest guide like Jacques Cousteau once did for the ocean.”

About the subject and the author – Born in 1964, Peter Wohlleben had already decided as a small child that he wanted to become a nature conservationist. He studied Forestry and was a civil servant at the State Forestry Administration for over twenty years. He now runs a forest academy in the Eifel region and works worldwide for the return of the primeval forests. He is a guest on numerous TV programmes, gives lectures and seminars and is the author of books about the forest and nature conservation issues. He has inspired people all over the world with his bestsellers The Hidden Life of Trees, The Inner Life of Animals, The Secret Wisdom of Nature and The Secret Bond between Humankind and Nature. Most recently, the magazine “Wohllebens Welt” was published. He was awarded the Bavarian Nature Conservation Medal in 2019 for his emotional and unconventional way of imparting knowledge. His latest book, The Heartbeat of Trees, is now available via Greystone books.

About the filmmaker – Director and screenwriter Jorg Adolph was born in Herford in 1967. He is considered to be one of the leading directors of documentaries in Germany. Last year saw him being nominated for the German Film Award for his latest work, “Parents’ School”. The film itself developed into a political issue and was the subject of much public controversy. From 1988 to 1994, Adolph studied Comtemporary German Literature and Media Studies in Marburg and then moved to the HFF in Munich where he studied Television Journalism and Documentary Film. His graduation film “Klein, schnell und außer Kontrolle” won the German Television Award in 2001. Since then, Adolph has been working as a freelance documentary filmmaker. Several of his works see him focusing on the artistic creative process: in “On/Off the Record”, he followed the internationally acclaimed Weilheim pop band The Notwist over one year during their work on their momentous album “Neon Golden”. In 2011, he directed the documentary feature “The Great Passion” about the preparations and performances of the Oberammergau Passion Play.

“Extremely exciting, instructive, entertaining documentary. Here you can be amazed, seriously thought and be happy.”– Bild

“THE HIDDEN LIFE OF TREES Based on the best-selling non-fiction book of the same name, “The Hidden Life of Trees” tells of the mechanisms of a forest and the lack of understanding of deforestation and reforestation. With the help of beautiful images the film creates awareness for the system of trees.” – Film-rezensionen

“Director Jörg Adolph’s documentary succeeds in conveying the joy and amazement about it on a journey through the world of nature. At times it is reminiscent of the motivating documentaries such as Erwin Wagenhofer’s “But beautiful”. In addition, the sensational shots by Jan Haft amaze. And in the spirit of the non-fiction author Peter Wohlleben, there is a positive outlook. Because for him one thing is certain: “The forest is coming back”. Of course, he remarks soberly: “It would only be nice if we were still there”.– Programmkino

“Adolph’s non-fiction documentary seeks the harmony between personal portraits, spectacular nature shots and political statements and thus walks a little on the trail of committed documentaries like Erwin Wagenhofer’s “WE FEED THE WORLD””.– epd-film

“Haft’s forest pictures are astonishing. At night the camera looks reverently into the canopy of the trees and a star-twinkling sky; it hovers over forests that are sometimes green, sometimes colorful; and immerse yourself in the fascinating play of light in a summer deciduous forest.“ – Süddeutsche Zeitung