The HBO Original THE INVISIBLE PILOT, a three-part documentary series by 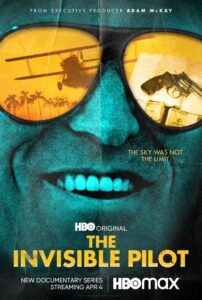 Emmy®-winning filmmakers Phil Lott and Ari Mark, is a tale of a charismatic, daredevil husband and father who unexpectedly jumped off a bridge in 1977, despite a seemingly happy home life and a lucrative career as a pilot. His small-town Arkansas community searches for his body in vain while family and friends seek answers. Years later, a mysterious story emerges involving hypnosis, secret identities and a double life of dangerous

missions and law-breaking. And that’s just the beginning… THE INVISIBLE PILOT unfolds in three chapters, each one divulging new, shocking surprises. When Gary Betzner, a father of three, unexpectedly commits suicide the mystery surrounding his death deepens and unfurls a caper-filled tale involving a clandestine world of drug smuggling, gun running, and involvement in a

covert war conducted at the highest level of the U.S. government. With a wealth of colorful archival material and shaped by vibrant storytelling by Gary’s wife, ex-wife, children, friends and associates, public defenders, law

officers and journalists, THE INVISIBLE PILOT is a cautionary tale of unchecked power and covert operations, centered around a small-town man with outsized dreams. Co-Directors Phil Lott and Ari Mark join us to walk us through the bare-bones description of a multi-layered story that not only defies belief, but illuminates one of the darkest and most consequential political scandals in American history.

For news and screenings go to: hbo.com/the-invisible-pilot

THE INVISIBLE PILOT debuts MONDAY, APRIL 4 (9:00-10:00 p.m. ET/PT) with new episodes airing subsequent Mondays at the same time. The series will debut on HBO and be available to stream on HBO Max.

About the filmmaker – Director Phil Lott began his career in London, England, working on feature films and documentaries. As cinematographer, he shot  “Indian Tales” for Academy Award-winning director Asif Kapadia, SXSW winning indie-feature, “Kelly and Cal” starring Juliette Lewis and Cybil Shepherd, and as writer-producer he made indie-feature “Neil’s Party”  released by Warner Bros. Between AMPLE’s doc series slate, Phil continues his work on features including, most recently,  directing 2nd unit on acclaimed IFC release, “Rust Creek”, and on a feature documentary which he and Ari are currently directing. After setting the visual style, and shooting as cinematographer, the pilot episode of Bafta-winning director Bart Layton’s  “Locked Up Abroad”, Phil was asked to direct an episode of season one of the international hit series. This quickly led to more documentary television and becoming a sought after show-runner in the USA. Recognized for bringing filmic storytelling and a distinctive cinematic visual style to all his shows, Phil always seeks to raise the bar of how unscripted television can look and be told. Phil has been behind some of the most recognizable documentary series and non-scripted shows on television including directing and setting the look for the pilot episode of Emmy-winning “Undercover Boss” for CBS, Critic’s Choice-nominated “The Pitch” for AMC (where he met Ari) and the Xbox Entertainment Studios hit series “Every Street United”. For more go to: ampleent.com

About the filmmaker – Before starting AMPLE, Ari Mark served as Senior Vice President of Original Programming for Xbox Entertainment Studios where he was challenged to jump start a digital platform’s ambitious move into non-scripted filmmaking. In a short time, he produced and launched Xbox’s first series, “Every Street United”, a global premium documentary series led by soccer icon, Thierry Henry. He also oversaw Xbox’s documentary slate, executive producing Zak Penn’s cult film, “Atari: Game Over” and Greg Barker’s feature documentary about the Boston Bombing, “The Thread”. Mark also produced Xbox’s first scripted project, “Possibilia”, a choose-your-own-adventure interactive film shown at both Sundance and Tribeca Film Festivals.Prior to Xbox, Ari worked at AMC where he oversaw their first launch into non-scripted programming. He developed the massive hit after show, “The Talking Dead”, the cult hit “Small Town Security”, and the critically acclaimed series, “The Pitch”, among others.Ari began his career at Sundance Channel where he quickly developed a reputation for bold programming choices and strong creative instincts. During his tenure, Ari helped develop the hit series “Iconoclasts”, “The Staircase”, “Architecture School”, Brett Morgen’s “Nimrod Nation” and “Brick City”, both of which won Peabody awards. He also helped oversee their feature documentary slate, producing more than 20 films including Alex Gibney’s “Human Behavior Experiments” and D.A. Pennebaker’s “War Room Revisited”.Before Sundance, Mark received his MFA from San Francisco State’s prestigious film program. His films, “The Gift” and “The Metamorphosis” were both acquired by Sundance Channel. For more go to: ampleent.com