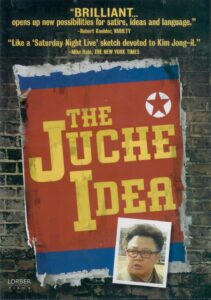 70’s to invigorate the North Korean film industry, THE JUCHE IDEA follows Yoon Jung Lee, a young video artist invited to work at a Juche art residency on a North Korean collective farm. The story is told through the films she made at the residency as well as interviews with a Bulgarian filmmaker and even a brief sci-fi movie. Jim Finn’s THE JUCHE IDEA is an  uproarious and provocative deconstruction of North Korean propaganda and philosophy. Mixing together eye-popping archival footage with deadpan re-enactments, Finn has created a complex docu-fiction that is equally thought- provoking and entertaining.

Translated as self- reliance, Juche (CHOO-chay) is a hybrid of Confucian and Stalinist thought that Kim Jong-il adapted from his father and  applied to the entire culture. In The Juche Idea, a sympathetic South Korean filmmaker visits a North Korean artists’ colony to bring Juche ideas into the 21st century.

She ends up producing hilariously stilted shorts, including a nonsensical sci-fi story and the enigmatic “Dentures of Imperialism.” THE JUCHE IDEA is both sardonic satire and historical excavation, an exuberant collage that reveals the absurdity at the heart of Kim-Jong-il’s regime. Director Jim Finn joins us for a free-wheeling conversation on the wildly imaginative nature of his filmmaking, Ulysses S, Grant as the most prolific killer of fascist… ever,  and the importance of Juche for all comrades.

Available to watch at: OVID.TV

Available for purchase at: kinolorber.com/film/thejucheidea

About the filmmaker – Jim Finn’s movies have been called ‘Utopian comedies’ and ‘trompe l’oeil films’. His Communist Trilogy is in the permanent collection of the Museum of Modern Art, New York. “Steeped in the obsolete language of revolutionary art,” The New York Times wrote that “Mr. Finn’s meticulous, deadpan mockumentaries often play like unearthed artifacts from an alternate universe.” His work has screened at international, avant-garde and underground film festivals like Rotterdam, Validivia, BAFICI, Edinburgh and the New York Film Festival as well as museums, universities, cinematheques and microcinemas. He was born in St. Louis in 1968 to a family of Midwestern Catholic salespeople. For more go to: jimfinn.org

The Annotated Field Guide of Ulysses S. Grant – For four years in the 1860’s half of the United States was held hostage by an unrecognized white supremacist republic. Shot on 16mm in national military parks, swamps, forests and the suburban sprawl across the former battlefields, The Annotated Field Guide of Ulysses S. Grant follows General Grant’s path liberating the southern United States. It focuses not only on his battles but on massacres committed by Confederate armies and the role of enslaved people in the war.

La Trinchera Luminosa del Presidente Gonzalo  – A recreation of one day at the Canto Grande prison in Peru, following women guerrillas from the Maoist Shining Path movement in their morning marches to their bedtime chants. Kept isolated in their own cellblocks, the guerrillas refused to acknowledge that they were imprisoned. Their cellblocks were another front in the People’s War: “shining trenches of combat”. This film shows the intense indoctrination and belief system of the brutal Latin American insurgency.

Interkosmos – In the 1970s, the East Germans hatch a top-secret plot to establish Communist colonies on the moons of Saturn and Jupiter. (And many more)

“The evidence that current filmmaking is brimming with original, standard-breaking creations has to include the work of Jim Finn, whose brilliant ‘The Juche Idea’… effectively completes a trilogy of ultra-compact features that boldly upturn notions of documentary and fiction, propaganda thought, reality and restaging, and even what an ‘experimental film’ actually is. To say that these films open up new possibilities for satire, ideas and language isn’t an overstatement.” – Robert Koehler, VARIETY

“An unconventional and wildly imaginative combination of humor, satire and faux documentary as a delightful and refreshing medium to enlighten the audience about Juche.” – Avi Offer, NYC Movie Guru