THE JUDGE – CHARACTER. CASES. COURAGE. is the story of Judge Robert 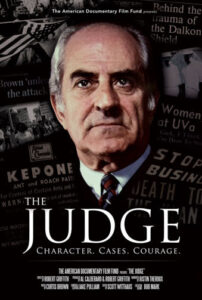 R. Merhige, Jr’s. heroic struggle to uphold the rule of law and the US Constitution. Honor, integrity and justice for all. In history’s hallowed halls of justice U.S. District Court Judge Robert R. Merhige, Jr. stands alongside Supreme Court Justice’s Ruth Bader Ginsberg and Thurgood Marshall as a champion for equal rights under the law for all citizens. THE JUDGE – CHARACTER. CASES. COURAGE. follows a distinguished, momentous and tumultuous 31-year tenure OF Judge Robert R. Merhige, Jr. on the Federal bench. He fought against the entrenched powers of the status quo to promote racial and gender equality, protect the environment, uphold the rule of law and the US Constitution. Most notable were the cases on mass school busing to bring about the desegregation of public schools in Richmond, VA, the former Confederate Capital. The public’s violent opposition to the Judge’s rulings 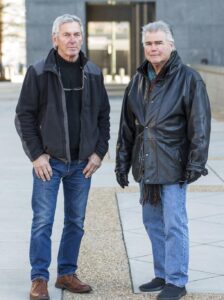 mandating busing led to an incendiary backlash requiring 24/7 police protection for the Judge and his family. The Judge’s life was threatened, the lives of his family threatened, his home picketed, his guest house burned, his dog shot, he was hung in effigy, and spit on in public. Through it all the Judge persevered, did what he felt was right and fair, and worked to promote racial equality.  THE JUDGE – CHARACTER. CASES. COURAGE. is a production of The American Documentary Film Fund and directed by Robert Griffith (“Voices of Hope and Recovery,” “Lillian”), executive produced by Al Calderaro (“Major Payne”), Bill Royall, Pam Royall, produced by Al Calderaro and Robert Griffith, and co-produced by Kahil Dotay. Director Robert Griffith and Executive Producer Al Calderaro join us to talk about one of the great, unsung heroes of America’s judiciary.

For news and updates got to: tadff.org/current-project