Giedrė Žickytė remarkable documentary, THE JUMP, chronicles the stranger than 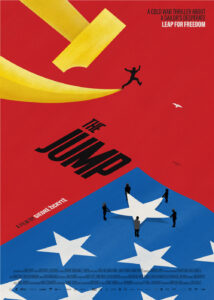 fiction story of a man determined to free himself from the stifling clutches of a political system that destroyed the lives of millions living behind the Iron Curtain, It’s Thanksgiving

Day, 1970. The US coast guard sets out to meet a Soviet vessel anchored just off the shore of Martha’s Vineyard. A one-day conference between the two nations has been set to discuss fishing rights in the Atlantic Ocean. While the talks are in full swing, Lithuanian sailor Simas Kudirka jumps across the icy water onto the American boat in a frantic bid for freedom. To his horror, and to

the outcry of the world media, the Americans return him to the Soviets and he is tried for treason. The event sets off a series of protests throughout the US begging for his freedom and all hope seems lost, until new information about Simas’ citizenship surfaces. Through eye-witness reports, rare archival footage and a dramatic first-

person re-enactment by now 90-year-old would-be defector Simas Kudirka, director Giedrė Žickytė takes us on a stranger-than-fiction journey that became an inspiration for people, pictures and politics, reaching all the way up to the White House. Director Giedrė Žickytė joins us to talk about why Simas Kudirka’s story, and the stories of the thousands of migrants from around the globe, both past migrants and those of the future who will be seeking freedom and a promise of a better life. are so near to her heart and to the people of her native land, Lithuania.

For news and updates go to: metfilmsales.com/the-jump

About the filmmaker – Giedrė Žickytė is an award-winning Lithuanian documentary film director and producer and the co-founder of the production company, MOONMAKERS. She graduated with a Master’s degree in Visual Arts from Vilnius Art Academy in 2007. Her films have been selected at numerous international film festivals including IDFA, Hot Docs, Visions du Réel (Sesterce d’or Fondation Goblet Award), Sheffield Doc/Fest (Short Doc Award), IFFR, Camerimage (Golden Frog), DocumentaMadrid (Audience Award), Krakow IFF (European Film Award), etc. Many of her films have been theatrically distributed and broadcast on television internationally. I’M NOT FROM HERE (co-directed with Maite Alberdi) was nominated at the European Film Academy Awards in 2016. MASTER AND TATYANA won 4 “Silver Cranes”, the Lithuanian Film Academy Awards including the awards for Best Director and Best Documentary, and was selected as one of “Ten Documentary Film Talents of 2015” by international film critic Tue Steen Müller. In 2016, she was awarded a St. Christopher’s statue by the Vilnius City Council for merits in cinema artwork. Giedrė produced THE EARTH IS BLUE AS AN ORANGE by Iryna Tsilyk which premiered in Sundance 2020 World Documentary Competition and received the Best Directing Award. Giedrė is a member of the European Film Academy, Lithuanian Filmmakers Union, alumni of Berlinale Talent Campus, Sources2, CPH:DOX LAB, EURODOC and dok.incubator.

“The story is brilliantly told and rich in surprises, and The Jump is surely one of this year’s unmissable non-fiction titles.” – Cineuropa