HBO Documentary Films’ THE LADY AND THE DALE, a four-part documentary 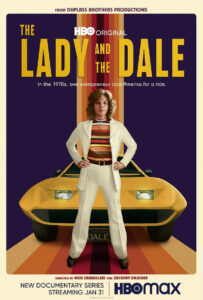 entrepreneur who rose to prominence during the 1970s oil crisis with her promotion of a fuel-efficient, three-wheeled car known as The Dale. At a time when three big American automobile manufacturers ruled the road, Liz launched a futurist vehicle that promised to get 70 miles to the gallon. Her

past. THE LADY AND THE DALE is a probing exploration of family and identity seen through the lens of the rise and fall of a fearless and wily innovator, an extraordinarily resilient woman and a dedicated parent. Co-director Zackary Drucker (Nick Cammilleri) joins us for a conversation on one of the more convoluted personal stories and one of the most shameless schemes in American business history.

For news and updates go to: hbo.com/documentaries/the-lady-and-the-dale

The series debuts with two back-to-back episodes SUNDAY, JANUARY 31 (9:00-11:00 p.m. ET/PT), with new episodes airing subsequent Sundays at 9:00 p.m. ET/PT. THE LADY AND THE DALE will premiere on HBO and be available to stream on HBO Max.

About the filmmaker – Zackary Drucker is an independent artist, cultural producer, and trans woman who breaks down the way we think about gender, sexuality, and seeing. She has performed and exhibited her work internationally in museums, galleries, and film festivals including the Whitney Biennial 2014, MoMA PS1, Hammer Museum, Art Gallery of Ontario, MCA San Diego, and SF MoMA, among others. Drucker is an Emmy-nominated Producer for the docu-series “This Is Me”, as well as a Producer on Golden Globe and Emmy-winning “Transparent”.

“If the four-part documentary The Lady and the Dale were someone you met at a post-pandemic cocktail party, it would be sidling up and saying, “Want to hear a crazy story?” – John Anderson, Wall Street Journal

“The Lady and the Dale is the rare biographical doc in which the subject’s domestic self is as interesting as their “professional” feats.” – Inkoo Kang, Hollywood Reporter

“The series, produced by the Duplass brothers and co-directed by Nick Cammilleri and Zackary Drucker, is as inventive in storytelling technique as Liz was in inventive grifting.” – John Doyle, Globe and Mail