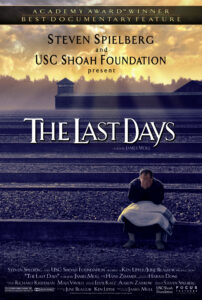 filmed in five countries, traces the compelling experiences of five Hungarian Holocaust survivors who fell victim to Hitler’s brutal war against the Jews during the final days of WWII. Including newly discovered historical footage and a rare interview with a former Nazi doctor at Auschwitz, the film tells the remarkable story of five people – now a grandmother, a teacher, a businessman, an artist, and a United States Congressman – as they return from the United States to their hometowns and to the ghettos and concentration camps in which they were 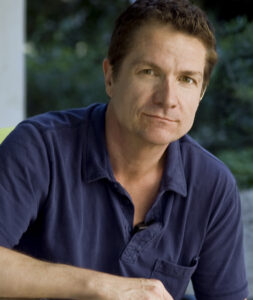 imprisoned. Through the eyes of the survivors and other witnesses, THE LAST DAYS recounts one of the most brutal chapters of this dark period in human history, when families were taken from their homes, stripped of their dignity, deported to concentration camps and ultimately murdered. Above all, THE LAST DAYS, is a potent depiction of personal strength and courage. Director James Moll joins us to talk about the film’s recent remastering and upcoming re-release, the enduring power of the five survivor’s stories and why the THE LAST DAYS continues to cast a very long and cautionary shadow over contemporary history.

For news, screenings and updates go to: thelastdays.com

About the filmmaker – James Moll’s work as a documentary filmmaker has earned him an Oscar, two Emmys and a Grammy, among many other awards. A protege of Steven Spielberg, Moll’s career has focused mostly on non-fiction story telling. Moll recently directed and produced of Foo Fighters Back and Forth, a feature documentary about the sixteen year career of the rock band Foo Fighters, and most recently produced Always Faithful, a feature-length documentary about American military war dogs and their handlers in Iraq and Afghanistan. Together with Matt Damon serving as executive producer, Moll directed and produced the sports adventure documentary Running the Sahara. Filmed in eight countries, the film follows three elite athletes as they attempt be the first to run across the entire Sahara Desert. Moll was the director/editor and producer of Inheritance, for which he received an Emmy Award and was nominated for a second. The film is about the psychological legacy that a prominent Nazi commander (Amon Goethe) left upon his daughter. The NBC feature documentary Price for Peace was directed and produced by Moll, executive produced by Stephen Ambrose and Steven Spielberg. The film focused on WWII in the Pacific, and was hosted by Tom Brokaw.  Moll received an Academy Award in 1999 for directing and editing the feature documentary The Last Days, executive produced by Steven Spielberg, chronicling the lives of five Hungarian Holocaust survivors. Moll produced Broken Silence, a collection of five foreign-language documentaries that premiered on primetime television in Russia, Poland, Argentina, the Czech Republic and Hungary. Moll has produced many programs for television, including programming for A&E, Hallmark, Vh1, TBS and History. Survivors of the Holocaust, a documentary produced for TBS earned Moll a Peabody Award and his first Emmy Award (the film was nominated for three). In addition to his work as a filmmaker, Moll established and operated The Shoah Foundation (currently the USC Shoah Foundation Institute) with Steven Spielberg for the purpose of videotaping Holocaust survivor testimonies around the world. The Foundation videotaped over 50,000 testimonies, in 57 countries.  Born in Allentown, PA and raised in Los Angeles, Moll earned a degree from the USC School of Cinematic Arts. Before graduation, he worked in feature film development for film producer Lauren Shuler Donner (Mr. Mom and the X-Men films). Moll is a member of the DGA, the Motion Picture Academy, and the Television Academy. Moll serves on the Executive Committee of the Documentary Branch of the Motion Picture Academy, and as co-chair for the DGA Documentary Award.For more: allentownproductions.com