In Maite Alberdi’s The Mole Agent Sergio is a Chilean spy. Sort of. At 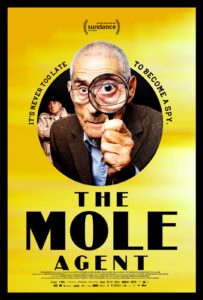 least, Sergio is offered the role of one after a casting session organized by Detective Romulo, a private investigator who needs a credible mole to infiltrate a retirement home. Romulo’s client, the concerned daughter of a resident, suspects her mother is being abused and hires him to find out what is really happening. However, Sergio is 83, not 007, and not an easy trainee when it comes to technology and spying techniques. But he is a keen student, looking for ways to distract

himself after recently losing his wife. What could be a better distraction than some undercover spy action? While gathering intelligence, Sergio grows close to several residents and realizes that the menacing truth beneath the surface is not what anyone had

suspected. Director Maite Alberdi’s The Mole Agent is a stylish combination of an observational dcumentary and a spy movie, with sleek camerawork and wonderfully watchable characters. It’s a unique meditation on compassion and loneliness that will infiltrate your heart and never let go.

For news and updates go to: cinereach.org/films/the-mole-agent

About the filmmaker – Director Maite Alberdi has developed a particular style that is characterized by an intimate portrait of small worlds, and her renowned personal hallmark has made her one of the most important voices in Latin American documentaries. In 2011 she released her first feature The Lifeguard. Her second film Tea Time won more than 12 international awards and was nominated for Best Ibero-American Film at the Goya Awards in 2016. In that same year, her short film I’m Not From Here premiered, and was later nominated for the European Films Award. Her most recent feature film The Grown Ups received 10 international awards. Additionally, she co-authored the book Documentary Film Theory in Chile 1957-1973. Maite is a Global Shaper, Young Leaders by the World Economic Forum (WEF), and a member of Motion Pictures Arts and Sciences (AMPAS).

“The most heartwarming spy movie ever made.” – Eric Kohn, IndieWire

“A perfect movie that will make you laugh and break your heart.” – Jonathan Christian, The Playlist

“There’s no small irony here when it takes the perceived artifice of a movie to get at a reality about aging that most of us would rather not face, but the more Sergio is asked to go undercover in “The Mole Agent,” the deeper it gets for everyone.” – Stephen Saito, Moveable Fest