The year is 1970. The world-famous Italian director, Luchino Visconti is 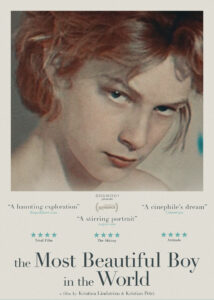 visiting Stockholm due to his new film Death in Venice, based on Thomas Mann’s 1912 novel of the same name. He is looking for a young boy to play the role of Tadzio, a young polish noble. At this point, Visconti has traveled around the whole world and filmed hundreds of boys and finally, after a number of screen tests, fifteen year old Stockholmer Björn Andresen is given the part. When the film premieres in London 1971, in the presence of Queen Elisabeth and princess Anne, Visconti declares the young Björn Andresen ”the most  beautiful boy in the world”. But the moniker became an epithet that has  come to haunt him for the rest of his life. He became an icon all over the

world, and just like his role figure Tadzio, the object for men who desire young boys. Today, almost 50 years later, Björn is struggling with addiction and questions like why he never loved himself. He is also discovering the

truth behind his mother’s disappearance and finding the clues to who his father is. THE MOST BEAUTIFUL BOY IN THE WORLD is a deeply personal and cinematic film about a person reconciling his past and taking control of his life. But it is

also a unique look behind the scenes of one of the world’s greatest film classics, Death in Venice, the structures of power and the cause of it, which recently has become known as #metoo. Co-directors Kristina Lindström and Kristian Petri join us to talk about approaching Björn Andresen gaining his trust enough to once again be scrutinized by the probing eye of filmmakers, this time with very different intentions.

For news and updates go to: themostbeautifulboy.com

About the filmmaker – Kristina Lindström (director) is a filmmaker, journalist, and author. She has worked at SVT as a producer, project manager, and filmmaker. She has directed highly acclaimed documentaries about some of Sweden’s most famous names and faces, including Astrid (2014) and Palme (with Maud Nycander, 2012). Among others, Lindström has been awarded The Publicists big award, the Linné Prize, Kristallen, Stockholm’s Culture Prize, and the Ikaros Award.

About the filmmaker – Kristian Petri (director) is a filmmaker, writer, and culture journalist with a distinctly personal voice that transcends genre and form. Petri won Best Direction at the Guldbagge Awards for his first feature film, Between Summers (1995), which was selected for the prestigious Quinzaine des Realisateurs in Cannes. Many of his films, including The Well (2005), Details (2003), and Tokyo Noice (2002) have been critically celebrated and have been nominated for and received a number of national and international awards.

“The Most Beautiful Boy in the World is one of the few documentaries to dwell so gravely and persuasively on how sudden fame can ruin a young life, bypassing any perks of stardom.” – Vogue

“On a very essential level, The Most Beautiful Boy In The World looks human beauty in the eye: both the atavistic emotions it provokes and its impermanence.” – Fionnuala Halligan, Screen International

“What makes this sad film bearable is that, this time, the camera feels more like a friend than a predator. Its presence gives Andresén the strength to confront his past instead of obliterating it with drink.” – Sarah Kent, The Arts Desk

“A deeply empathetic psychological portrait about a shy, sensitive boy who turned into a contemplative, harried man weighed down by things he was once too young to even realise.” – Ella Kemp, iNews.co.uk

“His grief is palatable. If utterly sad, it’s still incredibly immersive, a quality that reverberates throughout, a testament to Lindström and Petri’s directorial talents.” – Daniel Theophanous, One Room With A View