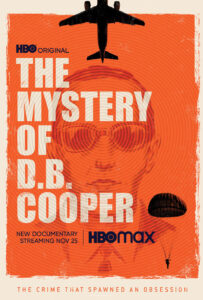 brings to life the stories of four individuals fervently believed by their family and friends to be “D.B. Cooper,” the mystery man who hijacked a 727 flying out of Seattle, traded the passengers’ lives for $200,000 and four parachutes, lept from the jet over some of Washington state’s roughest terrain, and was never heard from again. ‌ Almost 50 years later, the case continues to confound the FBI and inspire wild speculation as it remains the only unsolved airplane hijacking in United States history.‌ THE MYSTERY

OF D.B. COOPER draws from a combination of recreated and archival footage, as well as exclusive interviews with those most connected to the infamous case and its likeliest culprit, and explores how the heist inspired copycat hijackings around the world

and elevated Cooper to “legend” status before his plane even touched back down on land. ‌Director John Dower joins us for a lively conversation on the rabid D.B. Cooper cognoscenti who claim that they “know” what happened, the surprisingly strong bond Dower formed with the subjects he met making the film and the enduring and irresistible legend born on Thanksgiving eve, 1971.

For news, and screenings go to: hbo.com/documentaries/the-mystery-of-db-cooper

About the filmmaker – John Dower is one of the country’s leading documentary directors. His feature Thriller in Manila was in competition at Sundance, BAFTA and EMMY nominated, and won a Grierson and a Peabody Award. Bradley Wiggins – A Year In Yellow was also BAFTA nominated in the best director category. As well as his sporting films he has a keen eye for comedy. His music documentary Live Forever was described by The Guardian as, “Sublime … finds that the truth is stranger and funnier than the myths” and his latest theatrical feature My Scientology Movie praised by The Telegraph as “a giddy, Pythonesque delight”, with Variety calling it “riotously funny”. His first documentary short, Ronald, continues that absurd tone and proved a massive hit on the American festival circuit. My Scientology Movie, which he also co-wrote, has topped a million pounds at the UK box office and is on course to be the highest grossing documentary of the year. As well as screening at prestigious festivals such as Sundance, Toronto, Tribeca, LFF, Berlin and Cannes his films have broadcast on HBO, ESPN, Sky, the BBC & Channel 4. Alongside his documentary work, John has directed a number of commercials for numerous leading brands and Agencies worldwide. Recent work includes campaigns for The Co-operative Bank, Not On The High Street and Omega. As well as spots for Sky HD, Aviva, Mars and Vodaphone. pulsefilms.com/director/john-dower/film or johndower.co.uk

“It’s fascinating and a lot of fun, but in a larger sense it speaks to the reason why people get fascinated with a story like this.” – Christy Lemire, FilmWeek

“By the end of The Hijacker Who Vanished: The Mystery of DB Cooper, I felt like saying: “Dammit, I’m DB Cooper.” – Carol Midgley, Times (UK)

“These brilliant characters, some deeply entangled in the story, some distant from it but connected, are believers. This film asks what keeps them believing, and it is a far bigger question than the mystery itself.” – Rebecca Nicholson, Guardian

“Interspersed in the thrilling minute-by-minute drama of the hijacking are the stories of people suspected of being responsible. Sifting the implausible from the probable makes for a fascinating show.” – Suzi Feay, Financial Times