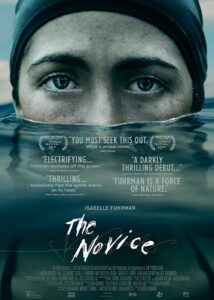 Fuhrman plays Alex Dall, a queer college freshman who joins her university’s rowing team and undertakes an obsessive physical and psychological journey to make it to the top varsity boat, no matter the cost. Intent on outperforming her teammates, Alex pushes herself to her limits—and beyond, alienating everyone around her in the name of success. Furhman’s fierce lead performance collides with Lauren

Hadaway’s bold direction and dynamic editing, creating a visceral window into a cutthroat world. THE NOVICE’s stylish cinematography and a seductive soundtrack complete the experience, evoking the romance and danger of falling in love; the attraction, the drama and the fallout. This unapologetic debut from Hadaway,

based on her personal experience as a competitive collegiate rower, heralds a bold new voice in storytelling. Inspired by her own experience nearly destroying herself while rowing competitively in college, THE NOVICE is a

thrilling take on the coming-of-age story, starring Isabelle Fuhrman  (Orphan), Amy Forsyth (Beautiful Boy), and Dilone (Halston). At its Tribeca Film Festival premiere in June it won multiple awards including Best US Narrative, Best Actress, and Best Cinematography. Director / writer Lauren Hadaway joins us for a lively conversation on the lived experience of her own story and it’s impact on The Novice, her ambitious blending of soundtrack, sound design and kinetic visual look into a cohesive whole and the performances she pulled from her superb cast, led by Isabelle Fuhrman.

For news, screenings and updates go to: novicemovie.com

THE NOVICE will be released by IFC on December 17

About he filmmaker – Lauren Hadaway is an LGBTQ+ writer and director with a background in sound editing and mixing. She briefly worked as a Dallas-based reality TV editor before moving to Los Angeles in 2012 to pursue a career in post-production sound. She built a career as an ADR supervisor on films including Whiplash, Justice League, The Conjuring 2, and The Hateful Eight before transitioning into writing and directing. Hadaway is a 2018 Outfest Screenwriting Lab Fellow. She is a 2018 Outfest Screenwriting Lab Fellow. At its 2021 Tribeca Film Festival premiere in June The Novice won multiple awards including Best US Narrative, Best Actress, and Best Cinematography.

“The Novice’ is an unflinching portrait of the pursuit of being best. When it’s over, you’ll question if the price owed is worth it given the hauntingly intelligent portrait.” – Murjani Rawls, Substream Magazine

“A film this raw made with such a steady, assured hand only comes along once in a while. We should take notice.” – Jourdain Searles, Hollywood Reporter

“Isabelle Fuhrman boldly pushes her troubled character to greater and greater extremes, daring the audience to recoil at the lengths this young woman will go to reach her dream.” – Tim Grierson. Screen International

“Lauren Hadaway has made a sports movie, a queer romance, a thriller, and, ultimately, a character study.” – Drew Gregory, Autostraddle

“The Novice takes a harrowing and effective look at the dark side of being an overachiever. Isabelle Fuhrman gives a noteworthy performance as a college student who finds out the hard way that winning isn’t worth it if you lose yourself in the process.” – Carla Hay, Culture Mix