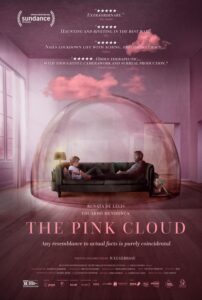 a time where life changes for people all over the world when a toxic and mysterious pink cloud has appeared, forcing the world indoors immediately and indefinitely. In Brazil, Giovana (Renata de Lélis) finds herself stuck in her apartment with a man she just met, Yago (Eduardo Mendonça). But their carefree one-night stand grows into a years-long relationship complicated by a child and  increasingly divergent worldviews as they

try to imagine a future from the depths of a potentially never-ending lockdown. THE PINK CLOUD was written in 2017 and shot in 2019, this stunning, slow-burn sci-fi debut from writer/director luli Gerbase is both an all to familiar reflection of our recent reality and a cathartic exploration of hope 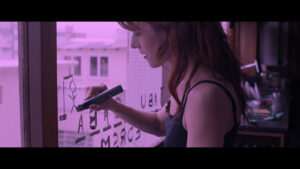 and despair, love and fear, and the boundlessness and limits of our ability as humans to adapt. Director and writer Iuli Gerbase joins us to talk about the inspiration for the film, creating a palpable sense of enveloping dread in the look of the film and creating a claustrophobic space for Giovanna and Yago to experience love, death, sex, boredom, parenting, contempt, indifference, and grudging respect.

For news and updates go to: bluefoxentertainment.com/the-pink-cloud

About the filmmaker – Iuli Gerbase, born in Brazil, is currently in the post-production process of her first feature film as a director and screenwriter, a drama called The Pink Cloud. She has written and directed six short films, that won many awards and were selected for festivals like Havana Film Festival, Toronto International Film Festival, Festin, Oaxaca Film Festival, Festival de Brasília and Kinoforum. One of her others feature film projects, called Mergulho, won first place at the international screenplay competition Guiões, in Portugal, and was a semifinalist at Cabíria, a Brazilian award for stories with female leads. Iuli holds a master’s degree in Creative Writing, focused on screenplay,  and an undergraduate degree in Cinema. For more go to: iuligerbase.com/aboutiuli

“Staggeringly original… will make you wonder if writer/director

“Haunting and riveting in the best way.” – Alissa Wilkinson, Vox

“Nails lockdown life with aching, precise accuracy… Might endure as more era-evocative than many of the intentional pandemic dramas to come.” – Guy Lodge, Variety