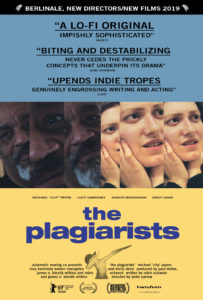 (who, along with Paul Dallas, served as producers), The Plagiarists is at once a hilarious send-up of low-budget American indie filmmaking and a probing inquiry into race, relationships, and the social uncanny. A young novelist (Lucy Kaminsky) and her cinematographer boyfriend (Eamon Monaghan) are waylaid by a snowstorm on their way to visit a friend in upstate New York and are taken in by the kindly yet enigmatic Clip (Michael “Clip” Payne of Parliament Funkadelic), who puts them up for the night. But an accidental discovery months later recasts in an unnerving light what had seemed like an agreeable evening, stoking resentments both latent and not-so-latent. Exhilaratingly intelligent and distinctively shot on a vintage TV-news camera, The Plagiarists is a work whose provocations are inseparable from its pleasures. Screenwriters James N. Kienitz Wilkins and Robin Schavoir 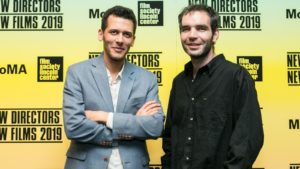 join us to talk about whip-smart project, as well as their creative process, white privilege, blending together acting styles and Dogma 95.

Background – The Plagiarists is a dramatic comedy about the clash of money and culture, reality and desire, race and identity. It’s a social satire about who has the privilege to say what in today’s world. It was conceived as a playful critique of the mannerisms of “indie film” used by aspiring filmmakers to denote authenticity of performance, often resulting in the casual perpetuation of stereotypes. The Plagiarists is at once the thing it mimics: a completely independent micro-budget feature shot entirely on vintage news cameras from the 1980s, despite a contemporary subject matter. The camera cited in the story is also the production camera, recording on real Betacam SP videotape (sourced from eBay) to create a visual style reflecting the internal debate over obsolescence, nostalgia, and the heavy weight of originality.

For news and updates go to: kimstim.com/film/plagiarists

“An adventurous comic thumping worth the working over of your sensibilities.” – Robert Abele, Los Angeles Times

“Its crude imagery and the sharp editing that implicitly contradicts it are deliberate components of a termite-like digging into the permutations of postmodern cultural work.” – Glenn Kenny, New York Times

“The Plagiarists’ perfectly judged mimicry of independent cinema illustrates the profound effect a lack of diversity has on the type of art that gets made.” – Patrick Gamble, CineVue

“The film improves upon reflection, raising, as it does, some knotty questions about originality in art and in life, as well as provocatively positing that even a copy of a copy of a copy has the potential to move hearts and minds.” – Keith Uhlich, Hollywood Reporter