This eye-opening, revealing new documentary, THE RISE AND FALL OF LULAROE, pulls

the curtain back on Mark Stidham and DeAnne Brady’s multi-level marketing company through interviews with retailers, warehouse workers, designers and others. Through a partnership with BuzzFeed Studios and journalist Stephanie McNeal’s in-depth investigation, THE RISE AND FALL OF LULAROE uncovers parts of the story that haven’t been heard before, including recent developments and first hand accounts from sources who are speaking out for the first time. The

film shines a light on present day LuLaRoe at the company’s most recent incentive trip in Cancun, Mexico called LuLaRoe D.R.E.A.M 2021. Here, we meet LuLaRoe’s first ever retailer and see that the company is still going strong, despite the growing community of Facebook activists, including former customers and  retailers, who are determined to stop at 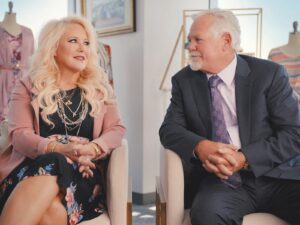 nothing to take down the organization. Experts in the documentary reflect on how LuLaRoe seduced thousands of recruits, some of whom ended up risking their homes, their bank accounts, and their relationships with close family and friends – all in an effort to be their own

boss by selling LuLaRoe leggings. THE RISE AND FALL OF LULAROE explores the  psychological techniques used by multi-level marketers, and how the company harnessed the full power of social media to onboard a massive pool of retailers. Senior culture writer for BuzzFeed News and consulting producer, Stephanie McNeal joins us to talk about her long-time interested in the general subject of multi-level marketing and her specific interest in LuLaRoe and the impact it has had on the lives of thousands of retailers, warehouse workers, designers and others.

For more about The Rise and Fall of Laluroe go to: discoveryplus.com

Producer Statement – As a senior culture writer and reporter at BuzzFeed News, I specialize in covering internet culture, the influencers and creators who shape it, viral trends, pop culture, how social media impacts our IRL world. I also write a newsletter about influencer culture, which you can subscribe to here. I am also active on Instagram, where I provide daily updates and commentary on the latest happenings in the influencer world and other musings about pop culture. I have covered LuLaRoe since the first class-action lawsuit in 2017, publishing a 10,000-word feature in 2020 that is the basis for the documentary on Discovery Plus, to be released December 2021. I served as a consulting producer on the film, and appeared in at as an expert. A highlight of 2021 for me has been participating in a documentary film, The Rise and Fall of LuLaRoe, based on a 10,000-word feature I wrote for BuzzFeed News in 2020. I served as a consulting producer and appeared in the film (for more information, click the page above.) I am represented by Leila Campoli at Stonesong Literary Agency. On my website you can find examples of some of my favorite things I have done recently. – Stephanie McNeal