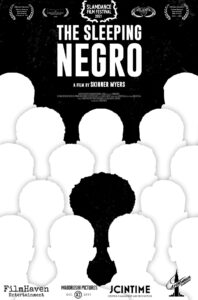 series of racially charged incidents, a young black man must overcome rage, alienation, and hopelessness in order to find his own humanity. The young black man, simply identified as “Man,” must resolve the personal meaning of his blackness when his white boss orders him to commit fraud to benefit the corporation. Struggling with an overwhelming sense of shame for going through with the illegal demand, Man seeks consolation by discussing his unease with a black former friend and his white fiancé. In the aftermath of these confusing, frustrating and

maddening interactions, Man realizes he’s been looking at his life through the wrong lens. Following on the footsteps of the LA Rebellion filmmakers, Charles Burnett (The Killer of 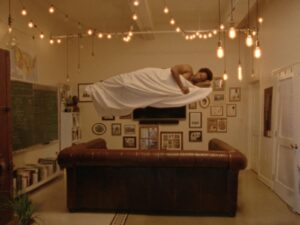 Sheep) and Billy Woodberry (Bless Their Little Hearts), director Skinner Myers tells a very personal and intimate Black story in a radically non-traditional cinematic style as a means to express freely his feelings as a Black man in America. Director, co-producer, writer and lead actor Skinner Myers joins us for a conversation on the production challenges of a filming in Los Angeles on a micro-budget, juggling the responsibilities in front and behind the camera and the significance of author / provocateur James Baldwin.

For news and updates go to: thesleepingnegro.com

For more go to: skinnermyers.com

Director’s Statement – I have constantly battled with the rage that has accompanied my experiences of surviving as a Black individual in America as well as in the rest of the world. I’ve sought to deal with that rage through my creative work, whether it be in my music, photography, acting or filmmaking. I became tired of repeatedly being informed that my art didn’t conform to what was profitable. I took all the irritation and rage that had built up up over the years and wrote this film. I wanted to find a creative way to work through my struggles. Thus, was born THE SLEEPING NEGRO. My objective with this film was threefold: I wanted to make a film that echoed my personal journey as a black man/artist; I wanted to poke the bear of White Supremacy while scrutinizing the mental gymnastics that Blacks have to perform in order to keep from going insane under such a system; and I wanted to show how the transactional nature of capitalism exploits and destroys black lives. I love surreal cinema because I feel it yields a space for work that doesn’t fit into the status quo. My intention was to visually call upon the work of filmmakers like Andrei Tarkovsky, Djibril Diop Mambety, Steve McQueen, Mahamat Saleh Haroun, Billy Woodberry, and Alexandro Jodorowsky. The style of THE SLEEPING NEGRO is dramatic surrealism, and it visualizes how my black mind processes what happens to me and around me as I go through this thing called life. To say this film was a challenge to create would be an understatement. I started shooting with only a small amount of cash in my pocket. My thought was that I would use the footage as a teaser to raise the rest of the funds to finish the film. I never used the footage as a teaser, but I raised money in spurts over a three-month stretch. It was tough to keep everything organized given everyone’s schedule, but we pulled it off. When it was all said and done, we spent nine half-days shooting THE SLEEPING NEGRO. My goal with this project is that it will provoke individuals to reexamine their perspective on the world. I hope you enjoy THE SLEEPING NEGRO.  – Skinner Myers

About the filmmaker – Writer / Director Skinner Myers is an award-winning filmmaker who currently resides in Los Angeles, California. Skinner wrote and directed four short films: CHIMERA, THE LAST SUPPER, OBSCURED, and NIGGER, while studying film at USC School of Cinematic Arts. His sixth film, LA TIERRA DEL EXODO, played in over 90 festivals worldwide and garnered a ton of awards and Best Screenplay, and Best Short Film. His film, FRANK EMBREE, took home the Grand Jury Award at Hollyshorts Film Festival and was in the Oscar competition for Best Short Live Action. His film, NIGHTMARES BY THE SEA, premiered at the Art Film Festival in Cannes and his ninth film is still on the festival circuit. His feature film debut, THE SLEEPING NEGRO, will have its World Premiere at the 2021 Slamdance Film Festival in Joshua Tree, California. Myers has studied at Columbia, Brooklyn College, the USC School of Cinematic Arts and is currently pursuing a PhD in Film Philosophy from the University of Amsterdam. For more go to: skinnermyers.com

“Myers’ brisk film is more monologue than movie, but undeniably essential in jolting everyone out of the collective complacency induced by the false perception of progress for all in this country.” – Carlos Aguilar, Los Angeles Times

“A superb character study of a black man, how he sees himself and how he was treated by society, it is surreal yet real and terrifying.” – Ulkar Alakbarova, moviemovesme.com

“Myers suggests we are all corruptible by a white man in a high tower but ends with a slightly more human slant and a reminder that all actions come with consequences.” – Michael J. Casey, Michael J. Cinema

“Skinner Myers effectively presents the issues so that the collective, global “we” must stop, ask questions, and wrestle with a very complicated problem.” – Alan Ng, Film Threat

“Remaining asleep to Myers as an African-American is a sin, but so is to be completely awake to the point where love for the self is all but embraced. In this impassioned, vigorous, lucid cinematic journey, the bleak, bruised-yet-fighting spirit of one Kendrick Lamar’s and every other prominent African artist strikes like lightning, and resonates like thunder. Like the greats, Myers, is a voice in his lane to place one’s focus on; his artistry effortlessly commanding, a feat implying many more to be accomplished in a budding career in American independent filmmaking”  – LOUIE BAHAROM, cinephiliaph.wordpress.com