Set in the dark underbelly of Silicon Valley, THE SOCIAL DILEMMA fuses 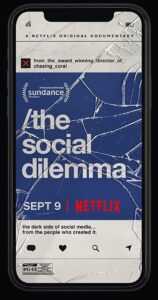 investigative documentary with enlightening narrative drama—think An Inconvenient Truth meets The Matrix. Expert testimony from tech whistle-blowers exposes our disturbing predicament: the services Big Tech provides—search engines, networks, instant information, et cetera—are merely the candy that lures us to bite. Once we’re hooked and coming back for more, the real commodity they sell is their prowess to influence and manipulate us. Technology wizards have masterminded a new form of capitalism, and humanity is now the raw resource feeding the machine. THE SOCIAL DILEMMA focuses on the powerful, hidden artificial intelligence tasked with hijacking our attention is tearing apart social norms, jeopardizing truth and democracy, and putting civilization on a

the disrupters by uncorking the invisible story purring from that mobile phone hidden in your pocket. Cunningly entertaining, THE SOCIAL DILEMMA sounds the alarm on surveillance capitalism in hopes of preserving the very fabric of our society before it’s too late. Director Jeff Orlowski joins us to talk about his incredibly relevant and important film.

For news, screenings and updates go to: thesocialdilemma.com

THE SOCIAL DILEMMA is screening on Netflix beginning September 9th.

About the filmmaker: Jeff Orlowski is the director, producer, and cinematographer of Chasing Coral (2017 Sundance Film Festival winner of the Audience Award: U.S. Documentary) and Chasing Ice (2012 Festival winner of the Excellence in Cinematography Award Documentary). Both films screened at the United Nations and Congress and won Emmy Awards. Orlowski was awarded the inaugural Sundance Institute Discovery Impact Fellowship and named a United Nations Environment Programme Champion of the Earth. For more on the work of Jeff Orlowski go to: exposurelabs.com

“An exemplary explainer, made with wit and clarity.” – Leslie Felperin, Hollywood Reporter

“[A] densely packed yet lively and entertaining documentary, whose accessibility is heightened by some narrative play-acting.” – Dennis Harvey, Variety

“The film will definitely make you more cognizant of your own behavior – not just of how you use the internet, but how the internet uses you.” – David Ehrlich, indieWire

“The Social Dilemma really hits hard about what happens on the other side of the screen.” – Danielle Solzman, Solzy at the Movies