What connects us? THE UNIVERSALITY OF IT ALL, a feature-length 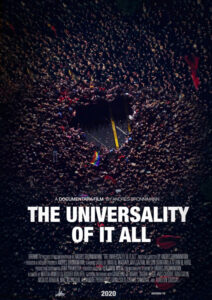 documentary by Andrés Bronnimann, explores this simple yet complex question with profound perspective and intimate detail. Told through the lens of the filmmaker’s longtime friendship with Emad, a Yemeni refugee living in Vancouver, Bronniman examines the subject of human migration and how it relates to such varied topics as climate change, colonialism, neoliberalism, globalization, identity politics, fertility rates, wealth gaps, trade wars, terrorism, and the media. Taking viewers on a journey around the world, the film analyzes various cases of migration using both an economic and historical viewpoint, arriving at the realization of our shared interconnectedness amidst the major events of the 21st century. Armed

with only a camera and computer, THE UNIVERSALITY OF IT ALL is the result of two years of passion, sacrifice, and determination by Bronnimann himself. His objective? To inspire young people across the globe to see the connections that all global and local issues have. “I believe that if more people are able to see the similarities and correlations that we all share, than perhaps we can find solutions to the pressing challenges ahead of us,” says Bronnimann. “I want to awaken the critical thinking of my generation, and this film is me doing everything I can to accomplish that.”

For news and updates go to: theuniversalityfilm.com

Director’s Statement – 21st-century audiences are used to speed and absorbing vast amounts of information, hence the film’s overall style is designed to fit those needs.  “The Universality of It All” has a mixture of styles, techniques, and storylines that make for a fresh and innovative approach to storytelling. Fast-paced editing, aesthetically-striking cinematography, thought-provoking montages, informationally-rich infographics, alternative and experimental soundtrack, et cetera; are among some of the qualities that make this film proper for its day and age. The goal was to create a piece that could entertain, inform, and inspire at the same time; hence all the artistic decisions were based on these three core concepts. The main storyline between the filmmaker and his best friend, is shot with a naturalistic approach that creates a sense of intimacy with the characters. In contrast, the historical and factual sequences are comprised of carefully selected visuals and symbolic cutting that add an extra layer of meaning to all the information given. We can find juxtapositions all across the film, not only in terms of style, but also in terms of narrative, locations, ideas, issues, and characters.

About the filmmaker – Director / Producer Andrés Bronnimann is a Swiss/Mexican/Costa Rican independent filmmaker based in Costa Rica and France. Throughout his career, he has traveled to more than 30 countries, creating music videos, web-series, and commercials for different brands, artists, and organizations. Both a producer and a writer, a manager and a creative, he’s been involved in nearly every stage in the film production pipeline. “The Universality of It All” is Andres’ debut film, nearly 2 years in the making, where he was the only crew member. For more go to: bronnitv.com