THE WAKE OF LIGHT tells the story of Mary, (Rome Brooks) a loving, selfless 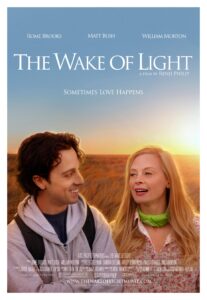 daughter who has spent her entire life caring for her widowed father after he suffered a stroke when she was a little girl. One day Mary meets Cole (Matt Bush, from TV’s “The Goldbergs”), a young man passing through her small town on a cross-country road trip, who falls for Mary and asks her to join him on his journey. Now Mary must choose between her deep-felt responsibility to her father or a chance at love. THE WAKE OF LIGHT has won over 20 Film Festival Awards during its festival

run. THE WAKE OF LIGHT is written, directed, and produced by Renji Phillip and stars Rome Brooks and Matt Bush. Director Renji Philip (Cheesecake Casserole) joins us for a conversation on his sincere and heartfelt meditation on the choices we make, the power we have to change our destinies.

For news, screenings, and updates go to: thewakeoflightmovie.com

THE WAKE OF LIGHT will have its virtual theatrical release on January 15, 2021 by Laemmle Theaters.

THE WAKE OF LIGHT will open on digital platforms on February 15, 2021.

About the filmmaker – Renji Philip is an award-winning writer, director and producer. He was born in Littleton, Colorado, the son of an Indian immigrant. He’s won 6 Best Film awards, 4 Best Director awards and 1 Best Screenplay awards for THE WAKE OF LIGHT. He studied acting at the Stella Adler Conservatory in New York for two years and with Howard Fine (and visiting teacher Uta Hagen) in Los Angeles as a full-scholarship student for four years. His films have been Officially Selected at Palm Springs, Raindance-London, Rhode Island International, Mill Valley, Frame 4 Frame, Mayday, Cinequest, Mill Valley, Methodfest, Winnipeg film festivals. For more go to: axispacificfilmworks.com

“THE WAKE OF LIGHT boasts a strong performance from Matt Bush, who elevates the movie.” – Nathaniel Muir, AIPT

“Beautifully shot and paying homage in part to What’s Eating Gilbert Grape, The Wake of Light may not be the most original storyline but it’s all about the journey on which the film takes its audience and not the destination.” – Joel Fisher, Battle Royale With Cheese

“A quiet, contemplative drama of people lost in failed dreams that lives up to some, if not all, of its ambitions.” – Daniel Eagan, Film Legacy

“The Wake of Light is what an indie should be.” – Tony Macklin, tonymacklin.net