Inspired by a New York Times No. 1 bestseller, The Way I See It is an unprecedented 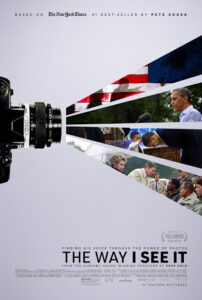 look  behind the scenes at two of the most iconic presidents in American history, Barack Obama and Ronald Reagan, as seen through the eyes of renowned photographer Pete Souza. As official White House photographer, Souza was an eyewitness to the unique and tremendous responsibilities of the most powerful person on Earth. Award-winning filmmaker Dawn Porter’s The Way I See It also reveals how Souza transforms from a respected photojournalist to a searing commentator on the issues we face as a country and a people. The Way I See It also traces Souza’s fearless public transformation from chronicler of

history to critic of an administration he believes is destroying the legacy of empathy, honor and hope that he witnessed during his 13 years at the White House.

Inspired by his two bestselling books, Obama: An Intimate Portrait and Shade: A Tale of Two Presidents, and featuring more than 400 of his photos, the film is an emotional and stirring reminder of America’s pledge of a government for and by the people. Director Dawn Porter joins us for a conversation about the personal journey of an accomplished photojournalist turned activist and when it comes to the most powerful person in the world, why judgement, perspective, honor, and empathy matter.

For news, screenings and updates go to: focusfeatures.com/the-way-i-see-it

Check out the future of voting at: headcount.org

About the filmmaker – Dawn Porter (Director, Producer) is an award-winning documentary filmmaker whose work has appeared on HBO, PBS, Discovery and Netflix, among others. A two-time Sundance Film Festival director, Porter may be best known for her film Trapped, which explored laws regulating abortion clinics in the American South. The film won the Special Jury Award for Social Impact Filmmaking at Sundance in 2016, in addition to a Peabody and numerous other awards. Porter’s 2013 documentary Gideon’s Army premiered on HBO and won Best Editing at Sundance. Gideon’s Army was nominated for both an Independent Spirit Award and an Emmy Award, and is part of the U.S. Department of State’s American Film Showcase. More recently, Porter completed John Lewis: Good Trouble, a feature documentary about the late congressman that will be distributed by Magnolia Pictures and CNN Films. Porter has been commissioned to make films for the Center for Investigative Reporting, Time and Essence magazines, The New York Times Op Docs and Amazon. Her work has received generous support from the MacArthur Foundation, the Ford Foundation, Tribeca Film Institute, Sundance Film Institute, Chicken & Egg Pictures and other esteemed organizations. The filmmaker is a member of the Academy of Motion Picture Arts and Sciences, the Academy of Television Arts & Sciences, and the Directors Guild of America.

“If you’ve seen Dawn Porter’s John Lewis documentary, you’ll fall in love with this candid look behind the scenes with a former White House photographer in her new documentary The Way I See It.” – Carolyn Mauricette, View From The Dark

“It’s effective because it gives us momentary relief and validates our rage while asking once again for us to have hope and to keep moving ahead.” – Allyson Johnson, The Young Folks

“Chief White House Photographer Pete Souza and the makers of The Way I See It kindly remind us what decency looked like not so long ago.” – Brigid Presecky, Impressionist Media

“Filmmaker Porter delivers a blisteringly-paced documentary that is, virtually from start to finish, nothing short of fascinating…” – David Nusair, Reel Film Reviews