THE WHITE FORTRESS (TABIJA) stars Pavle Čemerkić as Faruk. He is an orphan who lives with his ill grandmother in the rundown Sarajevo suburb of Alipasino Polje. 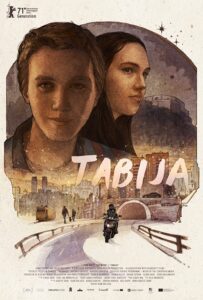 Faruk and spends his days foraging for scrap metal and dabbling in petty crime. One day he meets Mona, a timid teen from a politically powerful and affluent family. As Mona dreams of escaping the overbearing toxicity of her home life, she seeks refuge and opens herself up to Faruk, a boy from a world entirely different than  her own  THE

WHITE FORTRESS was Bosnia and Herzegovina’s Best International Feature Film selection to represent them at the 94th Academy Awards. The film is a Canada/Bosnia co-production feature that had its World Premiere at the Berlin International Film

Festival as part of its Generation 14 plus section. The cast also includes Jasmin Geljo, Kerim Čutuna, Alban Ukaj and Irena Mulamuhić. Director and writer Igor Drljača joins us for a conversation on the declining quality of life that has come with fewer and fewer job opportunities in his hometown of Sarajevo, working with professional and non-professional actors and striking the right storytelling balance between despair and resiliency.

To watch go to: gametheoryfilms.com/tabija

To find out more go to: igordrljaca.com

About the filmmaker – Director / writer / producer Igor Drljača runs the production company Timelapse Pictures with filmmaker Albert Shin, and is an Assistant Professor in the Department of Theatre and Film at the University of British Columbia. His award-winning short films include Woman in Purple (2010) and The Fuse: or How I Burned Simon Bolivar (2011), and The Archivists (2020). His critically-acclaimed debut feature Krivina (2012) premiered at the Toronto International Film Festival, and had its international premiere at Rotterdam. He co-produced Albert Shinʼs In Her Place (2014). His sophomore feature The Waiting Room (2015) premiered at the Locarno International Film Festival, and had its North American premiere at TIFF. His first feature documentary The Stone Speakers (2018) had its world premiere at TIFF, and international premiere at Berlinale. The White Fortress (Tabija, 2021), his third narrative feature, is a co-pro- duction between Canada and Bosnia-Herzegovina. It will have its world premiere at the 71st Berlinale as part of the Generation 14Plus competition. To find out more go to: igordrljaca.com

“Tabija oscillates between thriller and fairy tale. In multi-layered images, the film tells of the romantic dreams of young people and simultaneously documents tangibly the atmosphere of post-war Sarajevo…a declaration of love for Sarajevo.” – Berlinale

“…a sorrowful little love story that is also a touching portrait of a generation trapped in their nation’s divided present, which is itself a legacy of its troubled past…” – Variety

“Bosnian filmmaker Igor Drljača’s new crime-drama, which turns into a romance, is his most accomplished, touching and thought-provoking film yet.”- Cineuropa

“A moving mixture of romance and social realism, The White Fortress uses a thwarted love story as a metaphoric lament for the city of Sarajevo.” – Liam Lacey ,Original Cin