In the riveting documentary film, THE WOBBLIES, Filmmakers Deborah 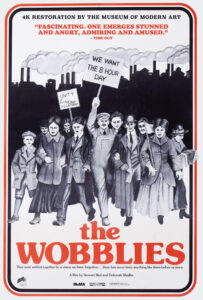 Shaffer and Stewart Bird weave history, archival film footage, interviews with former workers (in their 80s and 90s during the making of the film), cartoons, original art, and classic Wobbly songs (many written by Joe Hill) to pay tribute to the legacy of these rebels who paved the way and risked their lives for the many of the rights that we still have today. “Solidarity! All for One and One for All!” Founded in Chicago in 1905, the Industrial Workers of the World (IWW) took to organizing unskilled workers into one big union and changed the course of American history. This compelling documentary of the IWW (or “The Wobblies” as they were known), narrated by Roger Baldwin,

one of the founders of the ACLU, tells the story of workers in factories, sawmills, wheat fields, forests, mines and on the docks as they organize and demand better wages,

healthcare, overtime pay and safer working conditions. In some respects, men and women, Black and white, skilled and unskilled workers joining a union and speaking their minds seems so long ago, but in other ways, the film mirrors today’s headlines, depicting a nation torn by corporate greed. Co-

WOBBLIES, more than 40 years ago, their reflections on the significance of that nascent labor movement, the deadly violence brought down on those men and women who dared to ask for a fair wage and a decent life and what lessons we can glean from the first labor movement that could be successful in today’s virulently anti-labor workplace.

For updates and screenings go to: kinolorber.com/film/the-wobblies

Filmmaker Statement – When we started production on The Wobblies in 1977 our goal was to rescue and record an almost completely neglected chapter of American history as told by its elderly survivors. We never imagined then that the themes of labor exploitation, anti-immigrant legislation, and racial and gender discrimination would resonate as strongly today. We couldn’t be prouder to have the film included last year in the National Film Registry, and to have Kino Lorber present the new 4K MoMA restoration nationwide on International Workers Day.  – Stewart Bird & Deborah Shaffe

THE WOBBLIES was restored by the Museum of Modern Art and selected for preservation in 2021 by the Library of Congress National Film Registry, joining other essential documentaries such as The Fog of War, Paris is Burning, and Harlan County, USA. Kino Lorber Presents a New 4k Restoration of the Landmark Labor Movement Documentary The Wobblies’ was digitally scanned by the DuArt Digitization Center in full 4k resolution using the DFT Scanity. For the ultimate equality, the original cut ABC&D rolls of negative were the source for scanning and conforming into 4K 16-bit DPX files. The DPX media represents the new “digital negative” and was subsequently color graded and restored to create the archival and distribution masters. The new archival master is stored in MOMA’s Film Preservation Center.

“One emerges stunned and angry, admiring and amused.” – Time Out

““The Wobblies is a history of the IWW, researched lovingly and corroborated by the reminiscences of some of the union’s former members. When the facts are presented as fully as they have been here, the feelings that accompanied them aren’t difficult to imagine.” – The New York Times

“Iconic. Innovative. Eerily echoing current times. Replete with gorgeous archival footage, the film pays tribute to American workers who took the ideals of equality and free speech seriously enough to put their lives on the line for them. A joyous chronicle.” – New York Women in Film & Television

“A vivid look into America’s radical past. Its heroes and heroines are filled with vitality—a rare attribute these days.” – Studs Terkel