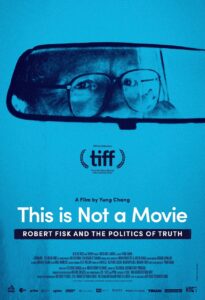 acclaimed British born Beirut-based foreign correspondent Robert Fisk. Fisk’s work is as vital as ever in an era of “fake news,” politicized facts, and the rise of ethno-nationalist politics. A Middle East correspondent for The Independent, Fisk holds more international journalism awards than any other foreign correspondent. For more than 40 years, journalist Robert Fisk has reported on some of the most violent and divisive conflicts in the world. Director Yung Chang (Up the Yangtze, The Fruit Hunters) captures Fisk in relentless action—feet on

the ground, notebook in hand, as he travels into landscapes devastated by war, ferreting out the facts and firing reports back home to reach an audience of millions. Director Yung Chang stops by to talk about Robert

Fisk’s dedicated work ethic, stamina and desire to talk with all sides of a story and why, in a time of disinformation and deceit by the powerful, his voice, his pen and his reporting have made him one of journalism’s most reliable sources of information and truth.

For news, updates and screenings go to: kimstim.com/film/this-is-not-a-movie

For more about Yung Chang’s work go to: yungfilms.com

Watch This Is Not a Movie on virtual cinema at laemmle.com/film/not-movie

About the filmmaker – Yung Chang is the director of Up the Yangtze (2007), China Heavyweight (2012), and The Fruit Hunters (2012). He is currently completing a screenplay for his first dramatic feature, Eggplant. In 2015, Chang was selected to participate in the prestigious Sundance Labs for Eggplant. Chang was the Spotlight Artist for the 2019 Reel Asian Int’l Film Festival where a live script reading of Eggplant was performed to a sold-out audience by talented actors from Kim’s Convenience, The Handmaid’s Tale and Locke & Key.  Chang’s award-winning short, Gatekeeper, qualified for the 2016 Oscars and is distributed by Field of Vision, Laura Poitras’ curated online film unit. His latest feature documentary, This is Not a Movie is about Robert Fisk, the iconoclastic Middle East correspondent. The film is co-produced by the National Film Board of Canada, currently on the festival circuit, World Premiered at TIFF 2019 . A graduate of the Meisner acting technique from the Neighborhood Playhouse School of the Theatre in NYC and Concordia University’s Mel Hoppenheim School of Cinema in Montreal, Chang brings emotional depth and cinematic realism into his work. Chang is the recipient of the Don Haig Award, the Yolande and Pierre Perrault Award, and the Guggenheim Emerging Artist Award. He is a member of the Directors Guild of Canada. In 2013, he was invited to become a member of the Academy of Motion Picture Arts and Sciences, the organization behind the Academy Awards. For more about Yung Chang’s work go to: yungfilms.com

“[The film] provides a comprehensive portrait of a man who has become essential reading.” – Hollywood Reporter

“[A] laudatory, engaging profile of [Robert Fisk]…” – Globe and Mail

“In This Is Not a Movie, Fisk’s life history is paired with a director up to the task of presenting the facts in a compelling, cogent manner.” – Hammer to Nail

“It is as fascinating to watch Fisk talk about the media landscape as it is to read his inimitable writings on the Middle East.” – Cineuropa

“Fisk’s story is a compelling reminder of just how real the news can be.”- POV Magazine