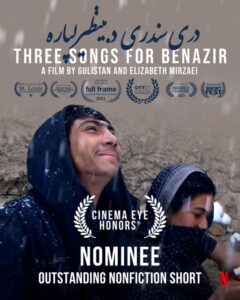 SONGS FOR BENAZIR tells the story of Shaista, a young man who—newly married to Benazir and living in a displacement camp in Kabul—

struggles to balance his dreams of being the first from his tribe to join the Afghan National Army with the responsibilities of starting a family. Gulistan and Elizabeth Mirzaei’s

remarkable access sheds light on the experience of modern-day Afghans who live, love, and seek space for themselves amid constant instability. Co-director Elizabeth  Mirzaei (Gulistan Mirzaei) and Producer Omar Mullick join us for a conversation on their strikingly intimate portrait of a young man in love determined to break free of his tribal bonds, defying his elders, in order to make his mark in the hyper-violent world of 21st century Afghanistan.

For more news and updates go to: threesongsforbenazir.com

About the filmmaker(s) – Elizabeth and Gulistan Mirzaei’s first feature film, LAILA AT THE BRIDGE, screened and won awards at numerous festivals including CPH:DOX, Locarno, Edinburgh, Bergen, and Santa Barbara among others. Their first short film, THREE SONGS FOR BENAZIR, had its world premiere at the Full Frame Documentary Film Festival in 2021, where it won the Jury Award for Best Short. Elizabeth and Gulistan’s films have also been supported by the Tribeca Film Institute, CalHumanities, Women in Film, Points North Institute, IFP,  and the Bertha Foundation. They founded Mirzaei Films to be an indigenous window into modern-day Afghanistan, making films that are recognized for their intimacy, rare access, and how they challenge perceptions of Afghanistan. They are based between California and Afghanistan and have two daughters together. For more go to: mirzaeifilms.com

Full Frame Documentary Film Festival – Jury Award, Best Short – “The jury honors a film that exemplifies the power and beauty of observational filmmaking. Deeply situated and attentively witnessed, Three Songs for Benazir is a concisely constructed character study that also implicitly evokes structural, societal, psychological, and political realities—centered in a camp in Kabul yet echoing far beyond—without need for exposition or over-emphasis. The specifics of Shaista’s struggle, the totality of his confinement, are clearly and evocatively conveyed through an elliptical structure, and extended to an expertly edited finale that haunted us and kept us talking long after the film had ended.”