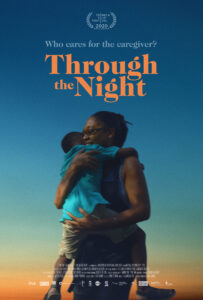 whose lives intersect at Dee’s Tots Daycare in New Rochelle, NY: a mother working the overnight shift as a pediatric nurse; another holding down three low-wage jobs to support her two girls; and Deloris “Nunu” Hogan, who for over two decades has cared for the children of parents with nowhere else to turn. A tender portrait of titanic strength, love and selflessness, THROUGH THE NIGHT showcases the multiplicity of “women’s work” – paid, underpaid and unpaid; emotional and physical; domestic and career-oriented – all while negotiating the terms of a dignified existence under the three arrows of racism, sexism and

capitalism in America. THROUGH THE NIGHT will open this Friday, December 11th at the Laemmle Virtual Cinema in addition to virtual cinemas around the country. Director

Loira Limbal joins us for a conversation on the myriad of issues raised in this deceptively simple meditation of the why and how millions of hard working people in the home of the brave can do all the right things only to find themselves one random event away from the economic abyss that is modern American life.

For news and updates go to: throughthenightfilm.com

“This quietly engaging documentary is also subtly political, showing with clear eyes how good people are trying to patch gaps in our society that shouldn’t be there in the the first place.” – Noel Murray, Los Angeles Times

“Through the Night is both celebration and indictment. A sympathetic depiction of “women’s work,” in all its unsung dignity, it’s also a quietly damning portrait of a merciless economy’s effect on working-class mothers… – Sheri Linden, Hollywood Reporter

“Without making it too obvious, Limbal’s documentary shines a light on the unspoken backbone of our economy. – Monica Castillo, Remezcla

‘”Through the Night” won me over though, not because director Loira Limbal has any illusions about objectivity, but because she prefers to step back and show the toll inequality takes on the very people our culture supposedly reveres most – families.” – Andrea Thompson, A Reel of One’s Own