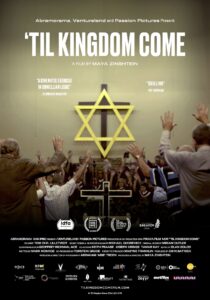 millions of American Evangelicals who are praying for the State of Israel. Among them are the Binghams, a dynasty of Kentucky pastors, and their Evangelical congregants in an impoverished coal mining town. They donate sacrificially to Israel’s foremost philanthropic organization, the International Fellowship of Christians and Jews, because they fervently believe the Jews are crucial to Jesus’s return. ’TIL KINGDOM COME traces this unusual relationship, from rural Kentucky to the halls of government in Washington, through the moving of the American Embassy in Jerusalem and to the annexation plan of the West-Bank.

With unparalleled access, the film exposes a stunning backstory of the Trump and Netanyahu administrations, where financial, political and messianic motivations intersect with the apocalyptic worldview that is

insistently reshaping American foreign policy toward Israel and the Middle-East. Director Maya Zinshtein and Producer Abie Troen join us for a lively conversation on how their clear-eyed film takes us right into the heart of some of the world’s most powerful political forces and how this confluence of interests are apparently hellbent to realize a worldview where the world ends in fiery judgement for non-believers and true believers.

For news, updates and screenings go to: tilkingdomcomefilm.com

About the filmmaker – Maya Zinshtein – Director, producer Maya Zinshtein is an Emmy award-winning Israeli documentary filmmaker and journalist with a BA in Cinema and French studies and an MA in Security and Diplomacy from Tel Aviv University. Her last documentary “Forever Pure” won an Emmy award for Outstanding Politics and Government documentary in 2018 (Independent Lens/PBS). An alumna of Sundance Institute, for the last ten years she has directed and produced documentaries broadcast on Israeli TV and abroad including by Netflix, BBC, ARTE/ZDF, and PBS, and screened at over 100 festivals around the world.

About the filmmaker – Abraham (Abie) Troen – Producer, Cinematography Abraham “Abie” Troen is an award-winning documentary filmmaker & D.O.P. He has led doc projects in Israel, Kenya, India, Mexico and the US, his work screened at TIFF, SXSW, Doc NYC, IDFA and online for National Geographic, Vanity Fair, CNE and Out Magazine. Abie studied at the Sam Spiegel Film School in Jerusalem and Brandeis University before receiving an MFA from the USC School of Cinematic Arts. There he was awarded the Annenberg Fellowship for specializing in documentary filmmaking. He currently resides in LA and films on both sides of the Atlantic.

“Evangelicals and right-wing Jews make for strange bedfellows and ‘Til Kingdom Come shows why people should be uncomfortable.” – Danielle Solzman, Solzy at the Movies

“Hones in on one of the three legs of the stool that Trump sat on. (The other two are white supremacy and nativism.)” – Louis Proyect, Counterpunch.org