TONY HAWK: UNTIL THE WHEELS FALL OFF center around a series of intimate 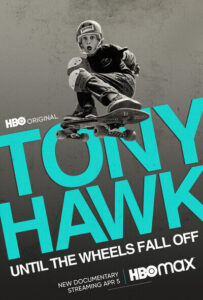 interviews with Tony Hawk himself.  The film is an all-encompassing look at the skateboarder’s

modern vertical skating and one of the most influential skateboarders of all time. TONY HAWK: UNTIL THE WHEELS FALL OFF features unprecedented access, never-before-seen footage, and interviews with Hawk, and prominent figures in the sport

including Stacy Peralta, Rodney Mullen, Mike McGill, Lance Mountain, Steve Caballero, Neil Blender, Andy MacDonald, Duane Peters, Sean Mortimer, and Christian Hosoi. Director and Producer Sam Jones (I Am Trying To Break Your Heart, Off Camera with Sam Jones) joins us for a conversation on his own passion for skateboarding, gaining the confidence of Tony, his family and his peers, as well as peeling back the layers of a highly motivated and hyper competitive athlete who has defined what it means to be an unconventional modern day superstar.

For updates and screenings go to: hbo.com/documentaries

About the filmmaker – Sam Jones is a director of documentary films and narrative television. He most recently directed an episode of “Ted Lasso” and a film in post production: “Running With Our Eyes Closed, A Film about Jason Isbell,” which is being co-produced by the Duplass Brothers and Jones. Jones is the creator and host of the documentary series “Off Camera with Sam Jones,” which had a 219 episode run on DirecTV’s Audience Network from 2013-2020. Jones is also an acclaimed commercial director and recently wrote and directed a series of commercials for OnePlus featuring Robert Downey Jr. He directed the Showtime series “Roadies,” created by Cameron Crowe, and also directed and produced the feature length Showtime documentary “Lost Songs: The Basement Tapes Continued,” a film that reexamines Bob Dylan’s “The Basement Tapes.” In 2002, Jones started his documentary career with “I Am Trying To Break Your Heart,” which chronicles beloved indie-rock band Wilco’s tumultuous recording of their acclaimed fourth album, “Yankee Hotel Foxtrot.” Rolling Stone named “I Am Trying To Break Your Heart” one of the best rock films of all time. Jones began his career as a photographer and quickly gained acclaim for his seminal portraits of cultural icons. His work has appeared on the covers of Vanity Fair, Rolling Stone, Esquire, GQ, Time, and many others, and he has had several books published.  Jones lives in Los Angeles with his daughters and still loves to skateboard.

Founded by Tony Hawk, The Skatepark Project (TSP) is a nonprofit organization working to increase access to outdoor recreation and free play through the creation of safe and inclusive community skateparks. TSP provides the resources, advocacy skills, grants and fellowship programs that guide skaters in creating their own community skateparks, from conception through construction.

“A humanistic exploration… chronicles Hawk’s prodigious, at times challenging, skateboarding career, but it also analyzes its subject with a keen psychological eye.” – Lena Wilson, The Wrap

“Whether you’re a skateboarding fan or not, this is an engrossing look back at the unquestionably remarkable career of a true legend, and his story isn’t over yet.” – Ethan Anderton, Slash Film

“An intimate and raw story of Hawk’s journey.” – Cheyenne Rountree, The Daily Beast

“The closing scenes, grappling with the complications of continuing to endanger one’s body at such an advanced age… is first funny, then philosophical, and then poignant.” – Jason Bailey, Crooked Marquee