Too Soon: Comedy After 9/11 follows the halt and gradual rebirth of 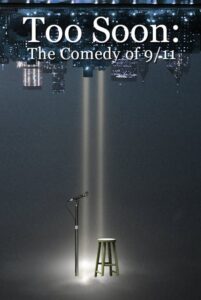 comedy following the events of September 11, 2001. In the immediate aftermath, stand-up comics, broadway performers, The Onion satirical newspaper, late-night talk shows and institutions like Saturday Night Live learn how to navigate the new landscape. When the tragedy is used to justify the Iraq War, a wave of political awakening sweeps through comedy, helping to transform Jon Stewart and Stephen Colbert into folk heroes. This type of biting political humor becomes more commonplace through the

late Aughts as traditionally under-represented comics dispel terrorist stereotypes. Entering the modern era, where media once asked, “Will We Ever Laugh Again?” jokes specifically addressing the

attacks are now prevalent on TV shows, films, and podcasts. And if we can appreciate jokes about 9/11, we can use humor to get through anything. Too Soon: Comedy After 9/11 features interviews with David Cross, Janeane Garofalo, Marc Maron, Matthew Broderick, Aasif  Mandvi, Rob Riggle, Nathan Lane, Gilbert

Gottfried, Cedric the Entertainer, Chris Kattan, Lewis Black, Doug Stanhope, Jimmy Carr, Russell Peters and many more. Co-directors Nick Scown and Julie Seabaugh stop by to talk about how stand-up comedians, Broadway performers, late-night hosts, Saturday Night Live cast members, The Onion staffers and a plethora of performers managed to help their audience laugh even in the darkest of days.

For news, screenings and updates go to: TooSoonDoc.com

About the filmmaker – Nick Fituri Scown is an Emmy-nominated Libyan-American filmmaker who was named one of the 25 Screenwriters to Watch by the Austin Film Festival this year. His narrative feature debut Pretty Bad Actress featuring Heather McComb and Jillian Bell was released by MVD Entertainment. Nick never expected to understand more about his own ethnic background in the process of making this documentary. As the son of a Libyan exchange student and a farm girl from Utah, his Muslim and Mormon DNA gives him a unique bond with the performers featured in the segment focusing on comics of Middle Eastern heritage. He embraces the film as an opportunity to highlight the positive aspects of his culture that are often buried in the media landscape.

About the filmmaker – Julie Seabaugh is an award-winning comedy journalist who has covered the art form for The New York Times, Rolling Stone, The Hollywood Reporter, Variety, GQ, The A.V. Club, Vulture, and numerous other outlets. Her appreciation of modern roasting culminated in the 2018 book Ringside at Roast Battle: The First Five Years of L.A.’s Fight Club for Comedians. She is producer and host of 2020 SiriusXM special Hope on Top: A Mitch Hedberg Oral History and is currently co-authoring a comedy memoir from stand-up and actor Byron Bowers. For a good fifteen years, Julie was the only full-time freelance comedy journalist in the United States. Now as a first-time filmmaker, she sees notable similarities between the two worlds. Both are male-dominated fields of self-starters motivated by different priorities than those toiling in the 9-to-5 world. Their practitioners process information and share their findings. Amid print journalism’s continued erosion, Too Soon has provided Julie an avenue to ask comedians questions in new ways, utilizing a new format.

“The film ably captures what that moment was like, and provides some insight, while also avoiding the off-putting smugness that’s often endemic to documentaries about comedy,” – Stephen Silver, Splice Today

“Too Soon manages to effectively detail the months and years where comedy changed forever.” – Joel Fisher, Battle Royale With Cheese

“There is a humanity in the documentary that is felt the entire time. Footage & interviews depict why comedians were having such trouble figuring out the situation.” – Nathaniel Muir, AIPT