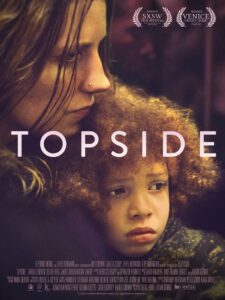 Farmer) as they navigate a perilous life in a close-knit and loving existence in the cavernous subway tunnels beneath Manhattan. When city officials raid their encampment, mother and daughter are forced “topside” into a nocturnal world that is even more

chaotic, menacing and unpredictable than their subterranean routine. TOPSIDE showcases an stunning central performance by Zhaila Farmer, making her feature-film debut, filmmakers Logan George and Celine Held (who also stars as Little’s mom, Nikki) cast a child’s-eye gaze onto two very different environments — one unspooling in muted darkness, the other in harsh and blinding light — eliciting wonder, fury and suspense out of a mother’s

desperate and heartbreaking attempts to keep her child safe from harm across one frantic and frigid wintry night. Co-director and co-writers, Logan George and Celine Held join us for a conversation on their affecting tale of the deep love and sacrifice rooted in the parent-child bond and the daunting challenges of setting their riveting feature debut in the underbelly of New York City.

For more information go to: elofilms.com/topside

TOPSIDE is now available through Vertical Entertainment in select theatres and on digital and VOD platforms.

About the filmmakers – Celine Held & Logan George – Writer & Director, ‘Nikki’ (Held), Editor (George) Celine Held & Logan George are a co-writer/director duo based in Brooklyn, New York. Logan & Celine’s debut feature film TOPSIDE will have its world premiere at the 77th Venice Film Festival in the International Critics’ Week Competition. Their work as a team has premiered in competition at Cannes Film Festival (Palme d’Or nominee 2018), Sundance Film Festival, Telluride Film Festival, SXSW (Jury Award for Best Director 2020), among many more. They were named as one of Filmmaker Magazine’s 25 New Faces of Independent Film in 2017. See more at elofilms.com.

“…in shining a stark and unflinching light at the marginalized, Held and George have made an arresting debut that certainly poises them as ones to watch in the future. – Rodrigo Perez, The Playlist

“Held and Farmer have natural onscreen chemistry, bringing an almost docudrama realism to their characters’ shared fate even as it teeters on tragedy.” – Michael Nordine, Variety

“This is a first feature for co-directors Held and Logan George, and while small, it is something of a knockout.” – Dennis Harvey, 48 Hills