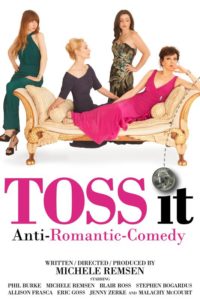 and seem a perfect match — then everything gets tossed. Finn wonders why he’s so fucked up, and Emily wonders why she’s so drawn to him. Toss It explores women as the real power players because women, by and large, run and nurture the fundamental unit of society: family. And via this particular family, Toss It looks at Natalie blindly following what she thinks is woman’s role, Marie seems to know nothing but by the end attains some wisdom by actively exploring female options, Adele has wisdom but in retrospect re-evaluates women’s culpability in fostering dominant men, and Emily discovers the age-old Socrates’ maxim ‘I know that I know nothing’ applies to herself – pushing her to learn what really matters. While Emily evolves, Finn seeks to discover ‘why he’s so fucked up’ – and finally, together, they toss everything they know, in this entertaining film that opens a dialogue for the audience to continue long after it ends. Director Producer / Writer / Lead Actor Michele Remsen joins us to talk about her witty and endearing “anti-romatic-comedy” and the story behind her passion project.

Filmmaker’s Statement –Toss It began as a one-act play for my LA theater company’s annual show, My Bitter Valentine, that evolved accidentally into a full play, which I then turned into a film script. I jokingly thought it was an exploration of why men are so screwed up, but as I crafted the characters, the story turned into an examination of what or who made them so screwed up and, by extension, of society at large. How people are shaped by traditions, lore, myths. And only the brave or desperate or seekers kick against convention to find some

kind of truth that’s their own. Life is often defined by big events, but it’s really in the back hallways that the real-deal goes down. So I peeled back the curtain on cornerstones of Western Civilization to try to figure out a few characters, and stumbled onto things I didn’t know. Much like Finn and Emily: he thinks he can spin everything and she thinks she knows everything, until everything gets tossed — it’s then both discover what they don’t know — as I did as I made this film: I begged, borrowed and crowd-sourced enough to get it in the can, and, as I pushed this production through, as producer / director / writer / actor, with a cast and crew who worked for fumes because they loved the project, by the end of an intense 12-day shoot we felt like family – which I think is what most people want: a tribe to which they belong. It’s lonely to navigate the world alone, but sharing what we discover makes it cozier, funnier and a little more joyful. – Michele Remsen

To find out more about news, screenings, and updates go to: journeymanfeatures.com

To find out more about the filmmaker go to: micheleremsen.com