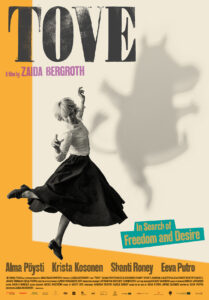 end of the war brings a new sense of artistic and social freedom for painter Tove Jansson. Modern art, dizzying parties and an open relationship with a married politician: Her unconventional life puts her at odds with her sculptor father’s strict ideals. Tove’s desire for liberty is put to the test when she meets theatre director Vivica Bandler. Her love for Vivica is electric and all-consuming but Tove begins to realize that the love she truly yearns has to be reciprocated. As she struggles with  her personal life, her creative endeavors take her in an unexpected direction. While focusing her artistic dreams on her painting, the work that started as a side project, the melancholic, haunting tales she told scared children in bomb shelters, rapidly takes on a life of its own. The

exploits of the Moomins, infused with inspiration from her own life, bring Tove international fame and financial freedom. There’s a daily comic strip, syndicated all over the world to 120 newspapers in 40

countries, a stage play and stories that continue to delight people around the world. But as she begins to find her artistic identity she has to learn to find herself. Her unrequited love for Vivica is preventing her true liberty and only by learning to break away from her can she truly be free. Director Zaida Bergroth joins us for an engaging conversation on humanizing the creative journey of an internationally recognized artistic talent and a woman energized by her personal search for freedom, identity and desire.

For news and updates go to: tovemovie.com

TOVE was released by junofilms.com

Director’s Statement – Tove Jansson – the ”Moominmamma”, the one that everybody knows, the one put on a pedestal. My impression of her has been this gray haired, wise, unnaturally calm and somehow untouchable human being. The more I have got to know her through the research and preparation, I have made for this film about her life, the more surprised I’ve become – this film will be anything but calm and predictable. Tove’s passion and energy, her strong emotions and how she expressed them and the fact that she was so unconventional; those were the things that surprised me the most. TOVE struggled with serious issues; she was aware of having a predisposition for depression, her relation to her father was complicated and the strenuous intimate relationships left their marks, but her positivity and her ability to always take other people into consideration and really understand them combined with how she looked for and appreciated light and joy, gives me inspiration and hope. These aspects I have wanted to include in the film about Tove. I wanted to depict Tove closely and sensitively and show as many surprising sides of her as possible, so that the audience understands how passionate and wild she was, how much she loved parties and love itself. TOVE tells about Tove’s life while celebrating courage and independence. With TOVE I once again deal with the same themes and characters that excite me, but this time around I especially enjoy Tove’s inspiring, rambunctious and positive company. Even though the events in her life were sometimes both painful and overwhelming, Tove kept her beautiful outlook on the world and the people in it. It is very comforting that such a wise and understanding person has lived such a wild and uncompromising life. I’m also excited to use my own knowledge in depicting Tove’s life: I’ve lived my childhood surrounded by artists – my mother is a painter and I’ve spent endless hours in her studio. I find it very exciting – and most of all important – to tell this story of an enormously talented and inspiring female artist who continues to have a huge impact on people all around the world.

About the director – Zaida Bergroth (born 1977) is a Finnish film screenwriter-director. Bergroth’s previous films (Maria ́s Paradise, Miami, The Good Son, Last Cowboy Standing) have been screened at festivals including TIFF and have received awards at the Busan International Film Festival, at the Chicago International Film Festival and many others. TOVE is her fifth feature film as a director.

“Though narratively simple, it’s a dazzling piece of work which perfectly captures the essence of the artist and both the necessity and cost of authenticity.” – Jennie Kermode, Eye for Film

“Biopics are a dime a dozen these days with many often featuring the usual cliched rise- and-fall scenario. But with Tove, director Zaida Bergroth is lucky enough to focus on a uniquely alluring Finnish sketcher.” – Susan Wloszczyna, AWFJ Women on Film

“TOVE dispatched me down a rabbit hole, or through a Moomin Door. I recommend the trip. – Anthony Lane, New Yorker

“A story that could have quickly succumbed to common themes about the dreams that are lost with age is instead a bitter-sweet celebration of a life, though imperfect, still lived to its fullest and with learned lessons accompanying regrets.” – Meghan White, AwardsWatch

“If anyone were expecting this to be about Moomins, they would be very disappointed, but if you were expecting a painful love story and struggle of an artist finding herself, this is the story for you.” – Katie Hogan, FILMHOUNDS Magazine