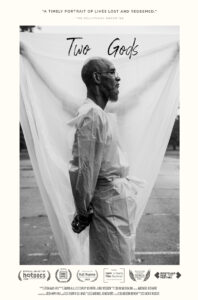 Hanif, a Muslim casket maker and ritual body washer in Newark, New Jersey, as he takes two young men under his wing to teach them how to live better lives. He mentors two kids— Furquan, a confident 12- year-old who comes from a rough home and Naz, a 17-year -old who has been fighting through his own struggles as a young black man growing up in Newark. Hardship comes when Furquan’s home life  becomes more turbulent and Naz gets caught up in a serious arrest. Hanif fears he has failed as a mentor and

begins to fall into a downward spiral. During each of their darkest moments, they take what they’ve learned from their pasts and from each other to pull through. And through faith, brotherhood and redemption they find their purpose. Director Zeshawn Ali joins us for a conversation on meeting subject Hanif, his exploration of this sacred Islamic body washing tradition and how his own family’s recent losses impacted the film’s storytelling trajectory.

For news, updates and screenings go to: twogodsfilm.com

Director’s Statement – Two Gods explores the juxtaposition of grief and the rituals of death with the vibrancy of coming of age. The film is a tonal balance between those two worlds, and our choice to shoot in black and white was to show how they’re so delicately interconnected. In this film, we witness a crisis of faith within the older and younger generations. This idea of “two Gods” began coming up within the community as a way to refer to the struggle of feeling like you’re not able to worship God and the streets at the same time. Who do you worship when you’re trying your best to survive?  One of the spaces where both generations come together is the janazah (the Islamic funeral) and the body washings. When someone dies, their loved ones and leaders in the community come together to wash the body as a way to prepare them for burial. About two years ago, as we were making this film, I lost my father and grandmother. I went from filming so many washings in this community to having to wash my own father. The grief is so hard to navigate, but the level of preparedness we felt because of the time we spent with Hanif made the process of burying our loved ones much easier. This story means so much to me and my brother Aman (the film’s producer) and I hope to have an impact on audiences in much the same way. Growing up Muslim in America, I always longed for interesting portrayals of Muslim Americans that were not political— stories that were personal, quiet and reflective. Our film gives nuance to our Muslim American community, which has needed a change in the narrative. And it presents a Muslim American story that is intersectional and showcases faith as a fact of life, rather than something that needs to be explained or defended.  Two Gods explores a meaningful story in a way that reflects the intimacy, spirituality and vibrancy of coming-of-age and the rituals of death. And through Hanif’s mentorship and the journey and struggles of him, Furquan and Naz, we learn that the fight to find purpose and meaning in those moments, both small and profound, is what finding faith is all is about. It reminds us all that to be human is to grieve love, and fight— for faith, for redemption, and for purpose. – Ali Zeshawn

About the filmmaker – Director Ali Zeshawn is originally from Ohio and is a graduate of Tisch School of the Arts at New York University. Two Gods is his first feature film and has received support from ITVS, Tribeca Film Institute, Ford Foundation, Sundance Institute, Doc Society, Points North Institute and IFP. He is a member of Brooklyn Filmmakers Collective and Meerkat Media. He is currently based in New York. For more: zeshawnali.com

To watch in a virtual release beginning May 21:

“A timely portrait of lives lost and redeemed.” – The Hollywood Reporter

“Ali expertly gathers footage to profile the travails and personal growth of his protagonists. It’s a moving, profound odyssey.” – Hammer to Nail

“This is real cinema vérité, one that authentically gives say to those who often remain voiceless.” – Film Forward

“A poetic meditation on life, death and the struggle to survive in between.” – Filmmaker Magazine

“Two Gods is a beautiful, deeply empathetic piece of storytelling that takes a ground-level look at our relationship with the biggest ideas in our lives. A masterpiece just waiting to be discovered.” – Criterion Cast