In his thoroughly documented and clarion call to action, Dan 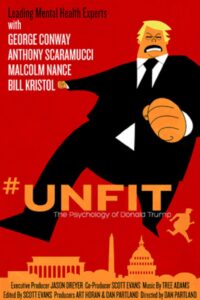 Partland’s latest documentary, #UNFIT: The Psychology of Donald Trump, provides a platform for a number of prominent mental health professionals to present their observations on camera as part of their ethical “Duty to Warn” the public of imminent danger presented by President Donald Trump. After years of empirical observation these leading mental health professionals, discuss DSM-5 disorders, their danger, and the doctor’s own Duty to Warn, They introduce the syndrome known as malignant narcissism and explain how it is responsible for some of history’s cruelest kinds of inhumanity.  They liken it symptoms to the behavior of

the most powerful human being on earth, a man with the capacity to launch several thousand nuclear weapons on his command, Donald Trump. Medical doctors and mental health professionals go on camera, on the record, for the record – it’s an eye-opening discussion, analysis, and science-

based examination of the behavior, psyche, condition, and stability of President Donald Trump. #UNFIT also examines Trump’s effect on our citizenry, culture, and institutions. Director Dan Partland joins us for a spirited conversation on Trump’s constant perversion of truth, his appeal to tribalism, and the way he has undermined the pillars of civil society, a free press, and an independent judiciary.

For news, screenings and updates go to: unfitfilm.com

About the filmmaker Dan Partland director/producer/writer of both documentary films & television for over 20 years. His work has found success in theatrical, art-house, cable, and network outlets and includes some landmark films of the American Independent Cinema. In the 15 years that the Emmys have recognized primetime nonfiction series, Partland’s shows have been nominated for best in class 5 times, and in 3 different sub-genres; Reality, Nonfiction format, and Documentary. Partland has twice won nonfiction series Emmys and in 2011 and 2012 was nominated by the Producers Guild of America for Nonfiction Producer of the Year. In 2001, Partland won an Emmy (Best Non-Fiction Program) for his work on the ground-breaking 13-part doc series American High on Fox. Partland served as the Supervising Producer and a Director of the critically acclaimed show that is widely regarded as one of the progenitors of the current doc series genre. Partland’s work has spanned several nonfiction genres.  He produced and directed How To Raise An Olympian, a winter Olympics special for NBC and was Showrunner for the multi-award-winning CNN archival series The Sixties. Partland was the Executive Producer and Showrunner of A&E’s Intervention for over 150 episodes, garnering countless awards and accolades including the Emmy for best reality series. Partland spent the early days of his career working under Albert Maysles, a founding filmmaker of the cinema verité movement. While on staff at Maysles Films, Partland worked on the dozens of documentary films and television commercials that the legendary company produced during his tenure. Partland is founder and President of DOCSHOP Productions. docshopproductions.com

#1 Documentary on iTunes and Apple TV

“Mental-health professionals, bound by ethics to point out danger, discuss how President Donald Trump is uniquely dangerous, a literal menace to society. Nay, not ‘discuss’: they are screaming it.” – MaryAnn Johanson, Flick Filosopher

“With stunning editing and a slew of thorough and reasoned criticism, this could be the nonfiction movie treatment of Trump to beat this year.” – Harvey S. Karten, Shockya.com