UNSETTLED is a feature-length documentary revealing the untold stories of 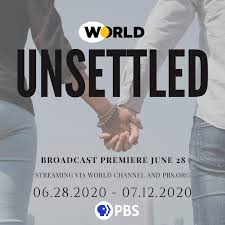 LGBTQ refugees and asylum seekers who have fled intense persecution from their home countries and who are resettling in the U.S. UNSETTLED follows four new arrivals, each of whom have escaped potential peril in their native countries for being different. They’ve landed in the purported “gay mecca” of San Francisco, yet even there, building a new life in an adopted nation is a precarious undertaking. As new

leadership in America continues to restrict immigrants and drastically cut the flow of refugees and asylum seekers, UNSETTLED sheds light on a group about which few people know. What are the

costs persecuted immigrants pay for seeking refuge? And how are everyday Americans stepping forward to help those most in need? Director and Producer Tom Shepard joins us for a conversation on the world wide danger faced by gay and transgender people, illegal in 70 countries and punishable by death in four countries, and the daunting challenges facing refugees and asylum seekers in the land of the free.

For news, screenings and updates go to unsettled.film

Broadcast premiere June 28 on worldchannel.org and pbs.org thru July 12, 2020

About the filmmaker: Tom Shepard, or the last 20 years has produced, directed, edited, and distributed documentary films. Four of his feature projects – SCOUT’S HONOR, KNOCKING, WHIZ KIDS and THE GROVE – have aired nationally on PBS (including POV, Independent Lens and PBS Plus). Coverage of his work has been featured prominently in the U.S. and foreign press, including reviews of three of his films in The New York Times, The Los Angeles Times, Washington Post, and Boston Globe among others. Shepard’s films have played in hundreds of film festivals worldwide – including Full Frame, Silver Docs and the Sundance Film Festival (where he won two top awards for SCOUT’S HONOR in 2001.) Shepard has raised two million dollars for production of his own work and has received funding from the Independent Television Service (ITVS) four times previously. He is the former Chairman of New Day Films and in 2013, founded the Youth Documentary Academy in Colorado where he teaches regularly. He graduated from Stanford University where he studied human biology and film.

“It does provide engrossing studies in human interest, as well as an empathetic look at the particular struggles of U.S. immigration in the new millennium.” – Dennis Harvey, Variety

“It also lets Americans understand how horrible things are for others…” – Lapacazo Sandoval, Los Angeles Sentinel