UNTIL THE WHEELS COME OFF focuses on the 50 year old cyclist, John Tarlton, 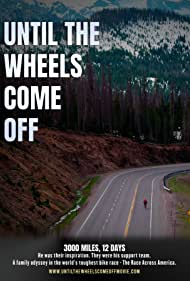 as he enters his second Race Across America. The race is considered to be the

most grueling bike race in the world. John is an avid endurance athlete who competes  in extreme sports to raise money and awareness for cancer research at the Stanford Cancer Institute (SCI). In a race, where more than half of the participants don’t even finish, John is dead set on winning his division. With his loyal family, that includes his wife Jenny

Dearborn and friends serving as his support crew as they embark on their arduous 12 day odyssey, stressing not only their physical limits, but their emotional limits as well. John, a gifted

athlete, was a cyclist in college, leverages this passion for health by using his athletic ability to help others. To date,  he has participated in six endurance cycling events and donated 100% of the funds raised to SCI. Co-directors Matt Dearborn (Even Stevens, Z Nation) and Rick Weiss (Entourage, The Office) stops by to talk about how the documentary project came together from the hundreds of hours of footage, in multiple formats as well as exploring the behind the scenes drama that gives the film its emotional depth and resonants.

For news and updates go to: untilthewheelscomeoffmovie.com

About the filmmaker – Matt Dearborn has written over a hundred episodes of television and sold original ideas to nearly every major network; Netflix, Sony, FOX, HBO, NBC, CBS, Nickelodeon, Lifetime, Disney Channel and the Cartoon Network. His absurdist comic style has earned Mr. Dearborn three Emmy nominations and a BAFTA award for creating Even Stevens (Outstanding International Series.) Other accolades include nominations for the NAACP’s Image Award and the prestigious Environment Media Award.  Currently Mr. Dearborn is partnering with Karl Schaefer (Z Nation) on High Five, a feature about a band of twenty-something’s who pull off an Ocean’s Eleven like revenge heist.

About the filmmakers – Rick Weis has working as a grip, electrician, best boy and gaffer on feature films such as “Crossworlds”, “Children of the Corn 5”, “The Glass Shield”, “Murder in the First” and “Pulp Fiction”. He transitioned to editing and immediately got an opportunity to work with legendary documentary filmmakers David Wolper and Robert Guenette on a 2 year CNN historical epic. His scripted credits include many well-known comedy and drama hits “Entourage” and “The Office”.