From Kim A. Snyder, director of the Peabody Award-winning 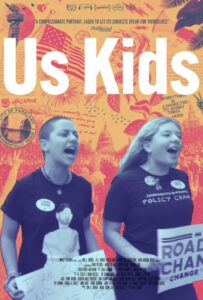 documentary  Newtown, comes Us Kids, an insightful, rousing coming-of-age story of a generation of youth leaders determined to take the reins and fight for justice at a most critical time in our nation’s history. Sparked by the plague of gun violence ravaging their schools, Us Kids, chronicles the March For Our Lives movement from the point of view of Emma González, David Hogg, Samantha Fuentes and the expansive coalition of teenage activists involved over the course of several

years as they pull off the largest youth protest in American history and set out across the country to build an inclusive and unprecedented youth movement that addresses racial justice, a growing public health crisis, and shocks a political system into change. Director Kim A. Snyder joins us for a conversation on the historic progress made by the reluctant activists who dramatically change the perception that young people should “wait there turn” in terms of affecting the course of politics in America and the world.

For news, updates and screenings go to: uskidsfilm.com

Get Involved – US KIDS is kicking off its launch with the just-announced Vote With Us Virtual Rally, a national GOTV campaign with the focus to educate, motivate & mobilize young people and communities of color to vote early. The event will take place on Saturday, October 24, at 3 p.m. ET/Noon PT, streaming at www.votewith.us and simulcast across YouTube and more. Ahead of its theatrical release on October 30, never-before-seen clips from the film will be shown throughout the rally, alongside performances, appearances and support by the film’s subjects, Lisa Bonet, Sherry Cola, Common, Andra Day, Candice Dupree, Emma González, David Hogg, Vic Mensa, Renee Montgomery, Mark Ruffalo, and Bria Smith.

About the filmmaker – Kim Snyder’s most recent feature documentary, Us Kids premiered in the U.S. Documentary Competition at the 2020 Sundance competition. Prior, she directed the Peabody award-winning documentary Newtown, which premiered in the US Competition at the 2016 Sundance Film Festival.  Newtown screened at premiere festivals worldwide and was theatrically released followed by a national broadcast on PBS’s Independent Lens and Netflix.  Her most recent short, Lessons from a School Shooting: Notes from Dunblane, premiered at the 2018 Tribeca Film Festival and was awarded Best Documentary Short followed by the DocDispatch Award at the 2018 Sheffield DocFest and a Grierson Award nomination.  Lessons… is a Netflix Original and is streaming in 196 countries. Snyder’s prior works include the feature documentary, Welcome to Shelbyville, nationally broadcast on PBS’s Independent Lens in 2011, and over a dozen short documentaries. Kim’s award-winning directorial debut feature documentary, I Remember Me was theatrically distributed by Zeitgeist Films. In 1994, she associate-produced the Academy Award-winning short film Trevor. Kim graduated with a Masters in International Affairs from the Johns Hopkins School of Advanced International Studies and resides in New York City.

“A potent testimony to the impact of citizen protest” – Dennis Harvey, VARIETY

“A galvanizing reminder that change is only possible if we believe in it.” – David Ehrlich, INDIEWIRE

“A timely picture that chronicles this movement with the emotional gut punch and importance it requires” – John Fink, The Film Stage

“A compassionate portrait, eager to let its subjects speak for themselves.” Hollywood Reporter