For over 40 years Val Kilmer, one of Hollywood’s most mercurial and/or 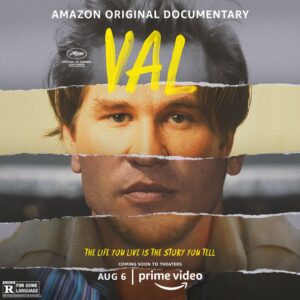 misunderstood actors has been documenting his own life and craft through film and video. He has amassed thousands of hours of footage, from 16mm home movies made with his brothers, from being the youngest student ever admitted to the drama department at Juilliard, to his time spent in iconic roles for blockbuster movies like Top Gun, The Doors, Tombstone, and Batman Forever. This raw, wildly original

and unflinching documentary reveals a life lived to extremes and a heart-filled, sometimes hilarious look at what it means to be an artist and a complex man. Co-directors Ting Poo

and Leo Scott stop by to talk about the voluminous amount of footage and other material documenting the life and times of Val Kilmer, as well as working with Val’s son and daughter to help them pull together a moving, warts and all, look a man looking back and looking forward as he grapples with an illness that strikes at the core of his ability to do the thing he loves.

About the filmmaker – Ting Poo majored in film at Columbia University, after which she worked at @ radicalmedia for almost 10 years cutting both commercial and long form content. In 2008, she edited the documentary Britney: For the Record which, at its premiere, was the most highly anticipated and watched program ever to air on MTV. She has worked on both independent features, and documentary series and is interested in storytelling across all platforms. In 2015, she co-edited her first VR piece, The Displaced, which won the Entertainment Grand Prix at Cannes and earned her an Emmy nomination for New Approaches: Current News Coverage. Recently, she edited “Heaven is a Traffic Jam on the 405” which won an Oscar for best documentary short.

About the filmmaker – Leo Scott works predominantly as an editor across the various disciples of film, including commercials, music videos, documentary and feature films. In 2013 he edited Gia Coppola’s debut feature Palo Alto. He has also collaborated with Harmony Korine on several films including working as editor on Trash Humpers. He first feature as producer, Gozo, a project he also edited, went on to win best UK feature at Raindance in 2016.

About Val Kilmer – Val Kilmer is one of the most prolific actors of his generation. From his more recent work as a career military officer in David Mamet’s Spartan, back through his work with Oliver Stone in The Doors and Michael Mann in Heat, to his early work in Top Gun, Kilmer has worked with many of film’s most respected directors and actors. The youngest student ever admitted to the drama department at Juilliard, Kilmer made his feature debut in the comedy Top Secret!, which he followed up with Real Genius and his breakout role as the Iceman in Tony Scott’s Top Gun. Other memorable roles include Jim Morrison in Oliver Stone’s The Doors, the title character in Batman Forever, Doc Holliday in Tombstone and Simon Templar in The Saint. His other starring roles include Michael Mann’s Heat, with Robert De Niro and Al Pacino; True Romance, directed by Tony Scott; Ron Howard’s Willow; At First Sight; and Thunderheart. Recent projects include Kiss, Kiss Bang, Bang, written and directed by Shane Black, and co-starring Robert Downey, Jr.; Millennium’s Bad Lieutenant, with Nicolas Cage and directed by Werner Herzog; Streets of Blood, and Francis Ford Coppola’s Twixt Now and Sunrise. He won the 2003 Prism Award for his work in The Salton Sea. During the production of Wonderland, Kilmer began a photography project that blossomed into a behind-the-scenes pictorial book. Released by Pocket Book, the photographs were exhibited in several cities in the United States. He also published a volume of his own poetry titled My Edens After Burns.  When Kilmer was at Juilliard, he co-wrote the play How it all Began, based on the true story of a West German radical. The play was directed by Des McAnuff and produced by Joseph Papp for the Public Theatre. He made his Broadway debut in the 1983 production of Slab Boys, with Sean Penn and Kevin Bacon. He also appeared in Papp’s Delacorte Theatre production of Henry IV: Part One, As You Like It, the title role of Hamlet and ‘Tis Pity She’s A Whore, also at Papp’s Public Theatre. Kilmer then starred in the Max Azria produced musical The Ten Commandments as Moses at the Kodak Theater in Los Angeles. In 2005, he starred on London’s West End at the Playhouse Theater in Andrew Rattenbury’s adaptation of The Postman Always Rings Twice as Frank Chambers, the drifter played by Jack Nicholson in the 1981 film version. Today, Kilmer tours the U.S. with the film production of his one man show Citizen Twain, aptly rechristened Cinema Twain.

“The result is undoubtedly a canny mediation on the vagaries of fame, but it feels more intimate and essential than that: a lifetime of searching and self-regard distilled, somehow, into a state of grace.” – Leah Greenblatt, Entertainment Weekly

“A vanity project that washes away the vanity” – Roger Moore, Movie Nation

“Attuned to what’s raw and heartfelt, “Val” reveals a Kilmer who has managed to process his identity/career not as a be-careful-what-you-wish-for story so much as a be-grateful-for-what-one-has experience.’ – Robert Abele, Los Angeles Times

“It offers Kilmer a showcase that he has been denied, not only by the ravages of cancer but, long before, by the troubled course of his career and the inherent obstacles of Hollywood filmmaking.” – Richard Brody, New Yorker

“The result is a documentary that keeps drawing you in, even when you think it’s keeping you at a certain distance, a one-of-a-kind portrait of a one-of-a-kind artist who, through good times and dreadful ones, has remained devoted to his art.” – Joe Morgenstern, Wall Street Journal