From the Smith Brothers and Director Tony Dean Smith comes VOLITION, a 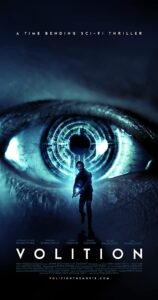 mind-bending science-fiction thriller, where the line between fate and free-will blurs. When you know your world is pre-determined, it’s hard to care about your choices.  This is true for James Odin (Adrian Glynn McMorran). On a rain-soaked night in 1991, two cars collide, leaving all drivers dead on the scene, including the mother of the lone survivor, a child , James Odin.  It’s a tragedy.  But what’s more tragic is that seven-year-old James foresaw the accident happening two days prior.  He tried to prevent it, but who’s going to believe a kid who claims to see the future? Twenty-plus years later, James is a product of the failed foster care system. Knowing that the events of his future

are predestined, he’s getting by, using his ability for petty crime and cheap thrills. But when a pre-sentient vision reveals to him his own imminent murder, James must go on the run and change the fate he knows is fixed. Director /co-screenwriter Tony Dean Smith and Producer / co-screenwriter Ryan Smith join us to talk about their consistently creative, high-wire tale of time travel, heartbreak and determining your own fate.

For news and updates go to: volitionthemovie.com

Tony Dean Smith is the recent recipient of the Director’s Guild off Canada “Best BC Director” award, granted at the Whistler Film Festival for his feature film debut, VOLITION. An award-winning director, writer and editor, Tony has gone on to write and direct various long-form projects for film & television – as well as constantly developing new material that’s close to his heart. Tony is also an acclaimed editor, having cut for Neill Blomkamp, Netflix, 20th Century Fox, Universal Studios, NBC, Syfy and others.

Ryan W. Smithis an award-winning writer/producer, having won the ScreenCraft Fellowship for his feature script, Jacaranda.  Along with his film work, Ryan has written on over 135 episodes of television, which has earned him two Leo Awards.  Ryan has written for such companies as Netflix, Anonymous Content, Andrew Lauren Productions, SyFy, Disney and Original Film. The Smith Brothers live in Vancouver, B.C., where they continue to be not only creative partners, but brothers.

“Prepare to get your mind scrambled” – Hollywood News

“Sci-fi with a healthy serving of smarts” — Electric Shadows

“One of the truly, best hybrids of horror and science fiction this year and perhaps this decade.” – Horror Hound