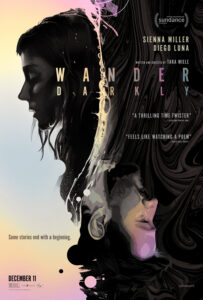 reality and the sub-conscious In the aftermath of a traumatic incident, Adrienne (Sienna Miller) finds herself in a disorienting state of limbo, unstuck in time and witnessing life from a distance. Forced to confront her troubled relationship with her longtime partner, Matteo (Diego Luna), and the future of their infant daughter, Adrienne must relive and renegotiate the events of the recent past—and solve the mystery of the accident. Stepping into the shadows with Matteo, Adrienne looks for clues about what went wrong between them.

Gently moving between the enigmatic and the romantic,  WANDER DARKLY traverses genre borders, taking us on a journey that is both uncanny and emotionally resonant. Miller gives a wonderfully layered performance, navigating

the film’s demanding tonal shifts. Luna is both elusive and engaged, walking the line between the film’s ethereal and earthly planes. Writer-director Tara Miele’s joins us for a lively conversation on her highly affecting existential drama that explores how we build narratives of love and loss from the fragmented memories of our lives and how we all live in a world where navigating the overwhelming truths of or daily lives can help us discover the love that binds us to each other as we face an uncertain future.

For news and updates go to: facebook.com/WanderDarkly

About the filmmaker – Tara Miele is a filmmaker originally from Long Island. She built her career working in both film and television, including directing three micro-budget features. She is perhaps most well known for her work that went viral in 2016 with the short film Meet a Muslim. Miele aims to create socially conscious work, and when she isn’t doing that, she is raising two daughters. Both love that their mom went viral. Tara became known for the viral video ‘Meet a Muslim’ which she created to combat Islamophobia. The video has been shared around the world over 45 million times. For television she directed the backdoor pilot Green Arrow and The Canaries, and has directed episodes of Arrow, Batwoman and Hawaii Five-0, as well as four micro budget feature films. She is a graduate of Ryan Murphy’s Half Foundation and the CBS Directing Initiative. Looking forward, Tara aims to create more socially conscious work in an effort to build bridges and conversations.

“Miller helps this emotionally complicated material to succeed. She is willing to take Adrienne to dangerous and unlikable places and is believable as a possible ghost, a shattered trauma survivor, and a romantic heroine.” – Anita Katz, San Francisco Examiner

“Miller and Luna are superb, traversing a range of emotional material without a false note. It’s their anger, their confusion, and their love that breathes life into the movie.” – Karen Gordon, Original Cin

“Miele directs her two leads to excellent performances, and she’s willing to take risks as a filmmaker.” – Brian Tallerico, RogerEbert.com